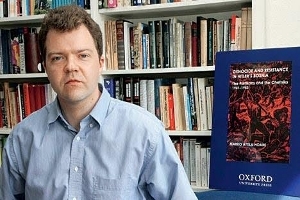 The year 2014 marks exactly a century since the start of World War I. On June 28, 1914, Gavrilo Princip, a Bosnian Serb fired the “shot heard around the world” when he assassinated Archduke Franz Ferdinand, the heir to the Austro-Hungarian throne and his wife Sophie, Duchess of Hohenberg, in Sarajevo, Bosnia and Herzegovina (BiH). This event sparked the beginning of WorldWar I, resulting in over 37 million casualties, the collapse of four empires, and, ultimately, the divisive legacy of nationalism within the Balkans.

For centuries, the date of June 28th has played a significant role in Balkan history. Celebrated as St. Vitus’ Day, it represents an important religious holiday that the Serbian Orthodox Church dedicated to Saint Prince Lazar and what they believe are the “Serbian holy martyrs who gave their lives to defend their faith during the Battle of Kosovo against Ottoman Empire on June 28, 1389.” Exactly five hundred and twenty-five years later, Gavrilo Princip’s assassination on that very same day triggered the Great War, profoundly affecting the politics of the region for a century to come. On June 28, 1989, the 600th anniversary of the Battle of Kosovo, Slobodan Milosevic, then President of Serbia, made what is known as the “Gazimestan speech” in Kosovo. The nationalism invoked and celebrated that day would accelerate the demise of Yugoslavia and ultimately result in the Bosnian genocide. As we commemorate World War I, Dr. Hoare will offer his expert insight into the causes of the Great War and the significance and implications that June 28th has had on Balkan history.

Dr. Marko Attila Hoare is an Associate Professor at the School of Economics, Politics and History at Kingston University London where he specializes in the history of South East Europe, in particular of Yugoslavia, Serbia and Bosnia and Herzegovina. He is the author of four published books: The History of Bosnia: From the Middle Ages to the Present Day; Genocide and Resistance in Hitler’s Bosnia: The Partisans and the Chetniks, 1941-1943; How Bosnia Armed and The Bosnian Muslims in the Second World War: A History. He is currently working on a history of modern Serbia.

Prior to his present post at Kingston University, Dr. Hoare was a Research Fellow at the Faculty of History of the University of Cambridge, a British Academy Postdoctoral Research Fellow, a war-crimes investigator at the International Criminal Tribunal for the former Yugoslavia, and a research assistant at the Bosnian Institute in London. He is currently the Greater Europe Section Co-Director of the Henry Jackson Society, an independent think-tank promoting democratic geopolitics and serves as the advisory editor of Democratiya: The Labour Friends of Iraq Review of Books, and is a member of the editorial board of Spirit of Bosnia, an international, interdisciplinary, bilingual, online journal. Dr. Hoare received a PhD from Yale University, an MA in History from University of Cambridge, MPhil History and MA in History from Yale University and a BA in History from the University of Cambridge.