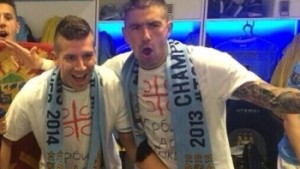 On behalf of the victims of genocide and aggression on Bosnia and Herzegovina residing in United States and Canada, we are writing to strongly protest the actions of two members of the Manchester City football squad during the team’s public celebrations of their second Premier League title in three years.

Manchester city defenders, Aleksandar Kolarov and Matija Nastasic chose to celebrate the title by wearing white t-shirts featuring highly offensive Serbian ultranationalist slogan “Srbija do Tokija” (“Serbia to Tokyo”) that were used by Serbian military and paramilitary forces during their campaign of aggression on Bosnia and Herzegovina and other neighboring countries in the 1990s under the dictatorship of Slobodan Milosevic. This slogan was always used in the context of implying Serb nationalist domination, particularly to promote violent expansionist tendencies at the expense of the neighboring countries and non-Serbs. These and other similar slogans, Serb troops used while committed genocide, crimes against humanity, rape, murder, and ethnic cleansing against the Bosniak and other non-Serb civilians, all in the name of forming a “greater” Serbian state.

We believe these are deliberate, premeditated actions by Kolarov and Nastasic, meant to promote an extremely destructive brand of Serbian nationalism, not one that promotes a justifiable pride in one’s own country, but rather a chauvinist and violent attitude towards its neighbors with whom the Serbian people are yet to fully reconcile. This act can only be fully compared to the disgraceful actions by Croatia defender Josip Simunic whose 10-match ban was rightly upheld by FIFA on Monday for shouting “Za Dom” (“For the Homeland”), which is a known World War II-era slogan used by Croatia’s then-puppet regime following a playoff victory against Iceland.

We respectfully ask that the Manchester City football club immediately investigate these actions and take all necessary steps to sanction the players and ensure that the sport of football is never used to promote hatred and aggression against other people. Many Bosnian citizens are huge fans of the Manchester City club, and have been hurt and disappointed with the actions of these two players.

We are also going to issue a protest to the governing football bodies, the Football Association, UEFA, and FIFA, to ask that the appropriate action be taken regarding the disgraceful behavior of these players.

Mr. Hamdija Custovic,
President of the CNAB Board of Directors
www.bosniak.org