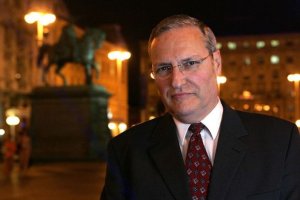 View Letter  in PDF  On behalf of Bosniaks in the U.S. and Canada and survivors of the Bosnian genocide, we protest the comments made by one of your activists Effraim Zuroff denying the genocide in Srebrenica and Bosnia-Herzegovina.

Serb nationalist newspapers reported today that Mr. Zuroff publicly denied that genocide took place in Bosnia-Herzegovina. According to their media, he stated there was no genocide in Bosnia-Herzegovina, thus reducing himself to a genocide denier (link: http://www.nezavisne.com/novosti/bih/Zurof-U-BiH-nije-bilo-genocida-224134.html)

It is incomprehensible that someone who works for such an important international organization whose mission includes remembrance of the lessons of the Holocaust, would allow themselves to be used by the Serb nationalists to openly deny genocide against Bosniaks during the war from 1992-1995. In fact, it is shocking, hurtful, and disgraceful that the victims of genocide and their families must again suffer the anguish of genocide denial, not only by those who participated and supported the atrocities and the ideology of hatred, but now by those who are supposed to apply the lessons of Holocaust to promote human rights and dignity, and ensure genocide never happens to anyone anywhere. Srebrenica Genocide is a legal fact, established by two international courts; both presided by Jewish holocaust survivors, who concluded that systematic executions of 8,000 Bosniak men and boys in Srebrenica alone constituted genocide.

In the Krstic judgement by the International Criminal Tribunal for the Former Yugoslavia, presiding Judge Theodor Meron, a Polish-American Jew and a holocaust survivor, concluded that Srebrenica was Genocide (numerous other judgments found the same reasoning, including the highest World Court):  “The gravity of genocide is reflected in the stringent requirements which must be satisfied before this conviction is imposed. These requirements – the demanding proof of specific intent and the showing that the group was targeted for destruction in its entirety or in substantial part – guard against a danger that convictions for this crime will be imposed lightly. Where these requirements are satisfied, however, the law must not shy away from referring to the crime committed by its proper name. By seeking to eliminate a part of the Bosnian Muslims, the Bosnian Serb forces committed genocide. They targeted for extinction the forty thousand

Bosnian Muslims living in Srebrenica, a group which was emblematic of the Bosnian Muslims in general. They stripped all the male Muslim prisoners, military and civilian, elderly and young, of their personal belongings and identification, and deliberately and methodically killed them solely on the basis of their identity. The Bosnian Serb forces were aware, when they embarked on this genocidal venture that the harm they caused would continue to plague the Bosnian Muslims. The Appeals Chamber states unequivocally that the law condemns, in appropriate terms, the deep and lasting injury inflicted, and calls the massacre at Srebrenica by its proper name: genocide. Those responsible will bear this stigma, and it will serve as a warning to those who may in future contemplate the commission of such a heinous act.”

During Serb-led genocide policies in Bosnia-Herzegovina, Simon Wiesenthal himself lobbied on behalf of Bosniaks who were the victims of this aggression.

If Mr. Wiesenthal were alive today, we can only imagine how he would have felt to learn that one of the activists of the organization bearing his name, reportedly, denies the use of the term genocide to refer to the heinous crimes committed against Bosniak civilians.

We respectfully demand that your institute apologizes for the hurtful comments reportedly made by your activist Effraim Zuroff, and thus distance yourself from extreme Serbian nationalists who are now perpetuating revisionist history based on genocide denial. If these reports are somehow incorrect, then we ask for a public explanation from Mr. Zuroff and the Simon Wiesenthal center. We hope that you will take this matter very seriously as we believe the members of your institute understand the ultimate ramifications of holocaust and genocide denial.

The Institute for Research of Genocide, Canada

International Team of Experts Institute for Research of Genocide Canada,

Director, Institute for Research of Crimes against Humanity and International Law, University of Sarajevo

Master of political sciences, independent analyst and publicist, living in Israel since 23. 06. 1993.

Professor of International law at the University of Illinois, a former agent of Bosnia and Herzegovina before the International Court of Justice