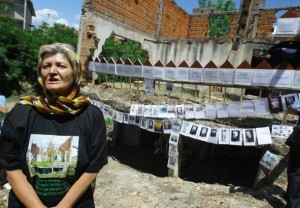 The Congress of North American Bosniaks (CNAB) and the Institute for Genocide Canada (IGC)  have issued the following statement due to the recent construction permit granted to the local leaders in Visegrad in favor of reconstruction of objects in the area of Pionirska Street:

On behalf of all victims and witnesses of cruel aggression and genocide in Bosnia and Herzegovina during the 1990s, who temporarily live and work in North America, the Congress of North American Bosniaks expresses concern and condemns recent activities in the Serb Republic of Bosnia and Herzegovina. In recent days local political leaders in the Visegrad municipality, located in the Serb Republic, approved and obtained the construction permit to demolish a house in Pionirska Street, the house that serves as a memorial to all fallen innocent victims who were subjected to horrendous war crimes during the aggression and genocide on Bosnia and Herzegovina.

For the former residence of Visegrad, who were unwillingly expelled from their homes during the aggression, the house serves as a reminder and monument for all murdered Bosniaks and civilians of Visegrad, who were buried on cemetery “Straziste” location nearby. In fact, the house is a symbol that holds and signifies the truth and reminds all refugees of their past and what they have gone through. In one night alone, at this house and houses around it there were 70 civilian casualties who were set on fire and burned alive. They are martyrs to the people of Visegrad. This tragedy is known as “Living Stake”. Moreover, this crime has been listed and registered with the International Criminal Tribunal for former Yugoslavia in which two attackers were convicted. Milan Lukic serves a lifetime sentence and Sredoje Lukic serves a sentence of 27 years. At the time, the convicts used automatic firearms to intimidate and kill all those who tried to escape the house on fire, evoked the Living Stake. In this crime, 59 civilians died including 17 children, ranging from the two days and up to 14 years old. Miraculously, a few of the victims survived this crime and helped to identify some of the involved in this crime. They directly brought the responsible ones to justice and provided some relief and peace to all families that have been affected with this morbid crime. The Congress of North American Bosniaks alarms and invites the leading world lawmakers, who could arbitrate in this case of matter, while for us the private property is supreme and without the owners’ consent the private property is intact and absolute.

However, the local politic leaders of Visegrad, who are in power at this moment, are persistent to obtain the permission for the demolition of the house. They are planning on building a new construction in its place even though the current object has been restored to its original state and brought back to its original owners. Thus, we condemn the recent actions taken by the local political leaders of Visegrad. Also, we perceive this action as an assault on the individuals’ rights and freedom, truth, justice and our state. This event is nothing new to us since the aggression was conducted on basis of the ethnic cleansing. This ethnic cleansing suppressed all that is different and authentic to an ethnic group and was against all efforts of coexistence based on mutual and individual respect in Bosnia and Herzegovina. Again, the Congress of North American Bosniaks invites the Government of the United States and the Government of Canada as well as any other human rights organization to join us in our effort to protect the individual rights of all victims and witnesses who suffered during the aggression in Bosnia and Herzegovina as well as to void the demolition permission and stop the demolition process altogether. Also, our Congress condemns inactivity and passivity of the Bosniak leaders and all other Bosnian and Herzegovinian political leaders in this important case of the individual rights, freedom, and Bosnia and Herzegovina’s wellbeing itself. We urge on all relevant individuals and institutions in Bosnia and Herzegovina to visit Pionirska Street and take action to prevent and protect the individual rights of refugees that returned to their homes and their possessions. Lastly, our Congress will follow and monitor the current situation on the ground and will act accordingly.