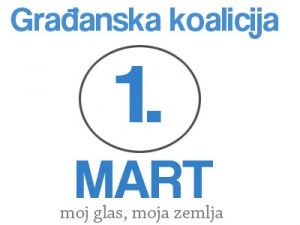 CNAB President, Hamdija Custovic, sent a congratulatory letter to Dr. Emir Suljagic, chief coordinator of the civic coalition “March First” on the occasion of the one year anniversary of this association.

On behalf of the Congress of North American Bosniaks (CNAB), I would like to congratulate you, your members and the activists of the coalition “March First” on the anniversary of your civic organization. The date of the establishment of the coalition marks a historic moment and the beginning of a well organized struggle for civil rights in Bosnia and Herzegovina. In these days, when these rights are threatened more than ever, because of corruption and a lack of political willpower of the leading political parties to fight for a unified Bosnia and Herzegovina, your work gives hope for a better future for Bosnia and Herzegovina and its citizens.

Thank you for all the success that you have realized as an organization in just one year. You have become the most powerful movement in Bosnia and Herzegovina. You have been fighting for civil rights of all its citizens, especially the refugees who returned back home and the displaced people all over the world including 350,000, who reside in the United States of America and Canada.

We are honored to have you as a partner in North America and that we were able to collaborate in the residence registration of thousands of refugees who will participate in the 2014 election year via absentee ballots as constituents of the RS entity in Bosnia and Herzegovina. We are also proud to have collaborated with you to protest against discriminating residency amendments on which, unfortunately, the fate for civil rights of displaced people and refuges in the smaller entities still hangs in the balance.

KBSA will continue to actively support the platform “Homeland”, aiming to mobilize at least 100,000 votes who will vote on a unified ballot in the RS entity. This platform represents the best path to abolish the entity voting system and return of the democratic and civic state of Bosnia and Herzegovina. CNAB will advise Bosniaks in North America to vote only for those political parties and individuals who will actively support this platform of a unified ballot.

Once again, on behalf of CNAB, thank you for all that you do for Bosnia and Herzegovina.

Hamdija Custovic
President of the CNAB Board of Directors