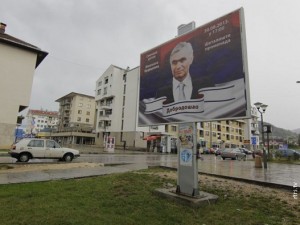 The International Criminal Tribunal for the former Yugoslavia convicted Momcilo Krajisnik for direct participation in a joint criminal enterprise where crime were committed in a large-scale of killings and persecutions of Bosniaks, Bosnian Croats and other non-Serbs in the 37 municipalities in Bosnia and Herzegovina.

The International Criminal Tribunal for the former Yugoslavia ruled that Krajisnik played a key role in the joint criminal enterprise whose purpose was to reduce percentage of Bosniak and Croatian population in Bosnia and Herzegovina by using force.

The decision of the President of the International Criminal Tribunal for the former Yugoslavia Theodore Meron to adopt Krajisnik’s request to be released on parole after two-thirds serving his sentence, arguing that he showed willingness to rehabilitation, and the ceremony itself to welcome the villain in Pale, glorifying crimes of aggression and genocide and forging papers are one of the biggest insults for victims of aggression on Republic of Bosnia and Herzegovina as well as genocide these people suffered.

It is a heavy punch to the truth about the crimes and criminals and justice for victims of crime, not only in Bosnia and Herzegovina, but also in the whole world.

Setting free criminal Krajisnik, about whom Richard Holbrooke, former U.S. Ambassador to the United Nations clearly said: “Krajisnik was one of the two most responsible authorities (with Karadzic) separatist, racist, deadly people who started the war in Bosnia and Herzegovina. His arrest removed the most prominent public opponent of the peace process in Bosnia and Herzegovina. Krajisnik is a racist, he’s separatist and he supports murderers “regarding early release is a great risk to restore reconciliation and restoration process of acceptance, recognition, respect and tolerance of others under which was underlying a well should be re-based relevance and viability and relevance of Bosnian society, and the existence of man and civilization in a united Europe and the world.

Theodore Meron’s decision is a tribute to the creators and perpetrators of genocide and aggression and does not contribute to peace and trust in Bosnia and Herzegovina, the region, Europe and the world.

This decision only continues to degrade the work of this important International Legal Institutions, whose degradation degrades International Law and Order and that directly threaten peace and stability in the world.

In that name, expressing the unanimous will of North American Bosniaks majority of whom are survivors and descendants of victims of aggression and genocide in Bosnia and Herzegovina, we join to the request of the “Mothers of Srebrenica”, who have petitioned the six thousand signatures to the Secretary General of United Nations Ban Ki-Moon to reexamine the role of the President of International Criminal Tribunal for the former Yugoslavia, Theodore Meron.

We believe that he has repeatedly demonstrated a bias in certain cases, and that he has been putting pressure on other judges.

We expect from the United Nations to re-examine Theodore Meron’ s role, and that they will do everything possible to re-examine his procedures in order to restore the reputation of the International Criminal Tribunal for the former Yugoslavia, but also to return reputation to the United Nations regarding severely degraded and shameful role in aggression and genocide in Bosnia and Herzegovina.

American and Canadian Bosniaks raise their voice against this kind of act of celebrating crime in Pale and with other organizations sending a message that they will by all means fight against the legalization of the results of aggression and genocide.

Director of the Institute for Research of Genocide Canada (IGC)

President of the Congress of North American Bosniaks (CNAB

Director of the Bosnian-American Genocide Institute and Education Center (BAGI)