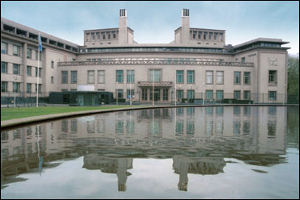 On the International Remembrance Day of the victims in the largest crime in Europe since the Second World War, the genocide in Srebrenica, the Appeals Chamber of the International Tribunal for the Former Yugoslavia (ICTY) in the Hague accepted the appeal and overturned the earlier decision of the Chairman of the Hague tribunal O-Gon Kwon who last year dismissed the charges against the leader of Bosnian Serbs, war criminal Radovan Karadzic on accusations of genocide in seven Bosnian municipalities.

This decision gives hope that the ICTY and the International Court of Justice (ICJ) will correct mistakes that have caused injustice to victims of genocide and aggression against Bosnia.

In the wake of the scandal about the alleged political pressures on Judge Meron, which caused damage to the credibility of the ICTY and following the acquittals of top Serbian military commanders, it is important that the ICTY and the ICJ continue their work and finish their mission so that all war criminals face justice.

We hope that the court will effectively and as quickly as possible complete the trial to Radovan Karadzic, who orchestrated the aggression against the Republic of Bosnia and Herzegovina and genocide against Bosniaks, along with his general Ratko Mladic, who personally led troops of so called: “Army of Republika Srpska” and committed monstrous genocide and massacres against Bosniak civilians in Srebrenica, and other cities of Podrinje region in July of 1995.

We also believe that the private letter by Judge Frederick Harhoff, which was published in a Danish newspapers Berlingske about political pressures on ICTY judges which led to dismissal of some or all of the charges against top military commanders, obliges the same court to reconsider all the facts relating to the responsibility of the military leadership of Serbia in the aggression against the Republic of Bosnia and Herzegovina, and their direct helping military and paramilitary formations in Bosnia, while they did genocide and ethnic cleansing in Bosnian territory.

Specifically, we are talking about the shocking acquittal of Momcilo Perisic (although earlier he was sentenced to 27 years) Jovica Stanisic, Franko Simatovic, which de facto and de jure released Serbia of any responsibility for the aggression against Republic of Bosnia and Herzegovina and crimes against Bosniaks.

The same court a few weeks ago made the right decision (which is not yet final) about direct responsibility of the Croatian leadership, namely the existence of a joint criminal enterprise of so called “Herceg Bosna” and Republic of Croatia headed by the first Croatian President Franjo Tudjman.

It is not logical that there isn’t the same judgment against Serbia, when in this case also exists clear cut evidence and documentation of “the existence of a joint criminal enterprise,” even on an larger scale then the judgment against Croatia.
After the scandalous reports about political pressures on ICTY, it is logical to conclude that the reason for this injustice towards Bosnia and Herzegovina and genocide victims was politically motivated, related to the illegal status of the entity of Republika Srpska, and the efforts that the legal existence of the same does not come into question with such judgment.

Also, we question the unfair decision of the ICJ from 2007 in the case of Bosnia and Herzegovina vs. Serbia and Montenegro for aggression and genocide, and we demand this lawsuit is reconsidering taking into account the damage caused to credibility of ICTY and the ICJ in the last 6 years, and indisputable direct role of Serbian military head in crimes committed in Sarajevo, Srebrenica and other Bosnian cities.