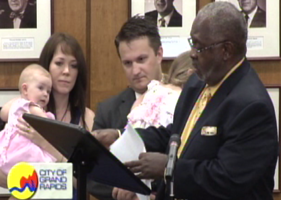 Haris Alibasic with his family and The President of the City Commission, James White

“There are estimated 12,000 Bosniak Americans who live in Grand Rapids and the Kent County area. The Congress of North American Bosniaks is the largest nongovernmental organization representing the interest of over 350,000 Bosniaks in the USA and Canada.

In May of 2008, Haris Alibašić was elected as the spokesperson, and then served as the vice president of the board. In February of 2009, at the conference held in Grand Rapids he was elected the President of the Congress of North American Bosniaks, where he served until May of 2013. During his presidency, many federal, state, provincial and city wide resolutions and proclamations were adopted recognizing Bosnia’s victims of war and genocide.   In November of 2011, for his efforts in supporting Bosnia and Herzegovina’s interests, Haris received a special recognition/gift from Bosnia and Herzegovina president, His Excellency Zeljko Komsic, whom Haris met on four different occasions.

In his role as the President he represented Bosniak community at conferences, annual events in the USA, Canada, Bosnia and Turkey, and in meetings with presidents, ministers, and State Department representatives.  He also used every opportunity that had to promote Grand Rapids, and its outstanding record in welcoming Bosniak and other refugees and immigrants to the community. In one of the meetings with the President of Bosnia and Herzegovina he presented the president with a book on Grand Rapids and extended an invitation to Michigan and Grand Rapids. He served the Bosniak American community well and in May of 2013 in Florida at an annual event of Bosniak American community, he received a special award  as recognition for outstanding contributions to the advancement of Bosniaks and Bosnia and Herzegovina, and for service as the Spokesperson from May 2008 – February 2009 and the President of the Board of the Congress of North American Bosniaks from February 2009- May 2013.

We commend Haris’ community engagement, his sense of civic duty and responsibility, and congratulate him on the Award.” The President of the Commission then ended the presentation with a standing ovation by everyone in the audience.

He also thanked his wife Katie, and his three kids for endless support in pursuing these extracurricular activities. Together with other past presidents and friends of the Congress, Haris created the Congress of North American Caucus to support the work and promote the interest of CNAB.