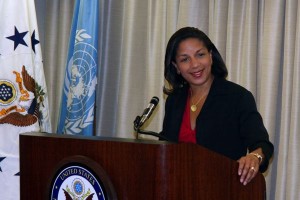 As citizens of the United States of America and representatives of some 300,000 Bosnian Americans, we are writing to you with grave concerns over the upcoming debate at the UN scheduled for April 2013 on the topic of the International Criminal Tribunal for the Former Yugoslavia (ICTY). Mr. Vuk Jeremic, President of the 67th General Assembly of the UN is continuing to use the UN as a platform to spread a Serbian nationalist agenda by organizing this event and is further adding insult to injury to victims of genocide and ethnic cleansing in BiH and Croatia.

Mr. Jeremic was directly responsible for the embarrassment caused at an event organized by the United Nations, featuring a performance and ovation for a Serbian ultra-nationalist military song “Marš na Drinu” – a song that has been a symbol of extremist Serbian nationalism and used as a motivational tool by the fascist and Nazi collaborator Draža Mihailović to commit war crimes in BiH. The same song was subsequently played by Serb perpetrators of genocide in BiH, while they raped, pillaged, and murdered Bosnian civilians in towns and concentration camps throughout BiH in the early ninety nineties. The song was banned by former Yugoslav authorities for inciting ethnic hatred, and even the Serbian parliament officially rejected it as a national anthem due to its provocative lyrics and history.

We are grateful that H.E. UN Secretary General, Ban Ki-moon issued an apology on January 17, 2013 expressing regret for the pain that this incident caused to the victims of genocide and war in BiH. The Secretary General graciously acknowledging that the song was not part of the official program and that he was not aware of the historical context behind it. Unfortunately, instead of realizing his mistake and apologizing, Mr. Jeremic went on a propaganda and media offensive in the Serbian nationalist media defending his actions and the song mentioned.

The ‘official’ document regarding the debate scheduled in April is expected to contain the Serbian perspective of the wars that occurred in the former Yugoslavia at the expense of well documented facts and justice. Rewriting and falsifying history has been the forefront agenda of Serbian nationalists. All considered, we urge you and the UN to start the process for immediate censure in the UN of Mr. Vuk Jeremic and we ask that you cancel the planned debate scheduled by genocide deniers at the UN General Assembly.

As American citizens, but also victims of ethnic cleansing and genocide, we must not to allow genocide deniers to use the UN as a platform to spread hateful propaganda and lies. Thank you for your attention regarding this urgent matter.