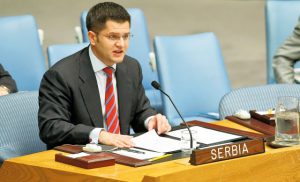 On June 2, 1993, Serbia submitted (now entirely discredited) propaganda report to the United Nations entitled: “Memorandum on War Crimes and Crimes of Genocide in Eastern Bosnia (communes of Bratunac, Skelani and Srebrenica) committed against the Serbian population from April 1992 to April 1993.” Almost 20 years later, they are using exactly the same tricks to purport their propaganda as official U.N. conclusions.

Serbian extremists and genocide deniers have scheduled a debate in the United Nations General Assembly for April 2013. The topic will be the work of The International Criminal Tribunal that prosecuted Serbs for war crimes, crimes of mass rape, crimes against humanity and Genocide in Bosnia-Herzegovina.

The debate was scheduled by a temporary UN General Assembly President, Serbian diplomat Vuk Jeremić under the direction of nationalists in Belgrade.
Jeremić, as the temporary president of the UN General Assembly is authorized to draft an official UN document after the debate. The ‘official’ document is expected to contain Serbian perspective of wars in former Yugoslavia at the expense of facts and justice.
Recently, Jeremić was responsible for organizing a concert at the UN with a performance of a nationalist militant Serbian song “March on the Drina.”

Serbian president Tomislav Nikolic, who is a radical nationalist and outspoken Srebrenica genocide denier, will also take the podium in a debate.