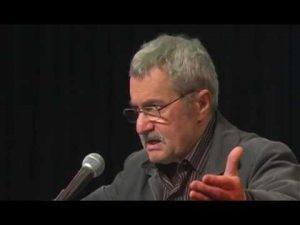 On behalf of survivors of the Genocide that took place in Bosnia and Herzegovina (BiH), we are deeply concerned with your decision to host Dr. Michael Parenti as a guest speaker on Tuesday, February 5, 2013.[i] Dr. Parenti, a self-proclaimed “Balkan Revisionist” and author of To Kill a Nation: The Attack on Yugoslavia explicitly denies that genocide, systematic rape of women and girls and ethnic cleansing ever took place in BiH.[ii] Dr. Parenti places the blame on Bosniaks for the Genocide in Srebrenica and other massacres that took place throughout the war of aggression on BiH.

As a result of his denial, Dr. Parenti has publicly disregarded that approximately 50,000 Bosniak women were raped during the three year war of aggression on BiH.[iii] The rapes were in fact used as an official Serb policy for ethnic cleansing. To this day, his outrageous claims have not been supported by internationally accepted evidence but only by other genocide deniers. His conspiracy theories are in direct conflict with the official rulings by the International Court of Justice, the International War Crimes Tribunal for Former Yugoslavia, as well as various declarations from the United States Congress and the European Parliament.

We acknowledge the importance of freedom of speech, however, falsifying facts and denying genocide is unacceptable and deeply traumatic for the survivors and their families who continue to suffer due to the physical and emotional trauma they underwent. Hundreds of thousands of Bosniaks who survived the genocide in BiH have made the United States and Canada their second home; most of them having lost someone as a result of genocide and aggression. Dr. Parenti uses his writing to purposely hurt those who have survived genocide, and having him attend this event will send the wrong message to all genocide survivors.

All genocide deniers directly undermine peace and justice because the only way to peace and reconciliation is to acknowledge the truth and punish those responsible. Dr. Parenti’s work and constant expression of denial is damaging to the healing process of the survivors of the genocide in BiH and we urge you to stand up for justice and truth and reject all affiliation with Dr. Parenti and his work.