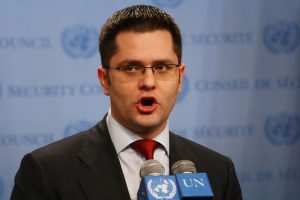 On January 15th, 2013, the Congress of North American Bosniaks wrote a letter of protest to the Secretary-General of the United Nations, H.E. Ban Ki-moon, regarding the scandal that occurred at the United Nations at an event organized by Vuk Jeremic, former Serbian foreign minister, now serving as the President of the 67th General Assembly of the United Nations. The event featured a performance and ovation for a Serbian ultra-nationalist military song “Marš na Drinu” which has, throughout the 20th century, been used to incite hatred and violence against non-Serb population in Bosnia and Herzegovina.

Through his press secretary, Ban Ki-moon subsequently issued an apology on January 17th, expressing regret for the pain this incident caused to the victims of genocide and war in Bosnia and Herzegovina. They offered an explanation that the song was not part of the official program and that the Secretary-General was not aware of the historical context behind it.

On January 18th, 2013, CNAB and its partner organizations in North America sent a follow-up letter to the Secretary-General asking for a full investigation into this scandalous event, and requesting an unequivocal condemnation of those responsible. We also ask for immediate suspension of Mr. Vuk Jeremic, due to his deliberate actions that caused tremendous pain to the victims of genocide. It should be noted that Mr. Jeremic continues to deny any wrongdoing and remains unapologetic.  Below are the contents of our open letter to the Secretary-General. (View the letter in PDF)

On behalf of 350,000 Bosnian Americans, and 50,000 Bosnian Canadians we would like to thank you for your statement and expression of regret for the hurt and pain that the performance of the provocative and offensive Serb nationalist song “Marš na  Drinu (March on the river Drina)” caused to the victims of genocide and war in Bosnia and Herzegovina. Due to the historical significance of the song, it is necessary that the United Nations clearly condemns the deliberate actions by those responsible.

The performance of this song was never meant to promote peace, as Mr. Jeremic claimed, but instead, it was used to promote Serbian ultra-nationalism and was an insult to victims of genocide in Bosnia and Herzegovina. Since the Second World War, “Marš na Drinu” has been a symbol of extremist Serbian nationalism, used as a motivational tool by the fascist and Nazi collaborator Draža Mihailovic to commit war crimes in Bosnia and Herzegovina. The same song was subsequently played by Serb perpetrators of genocide in Bosnia, while they raped, pillaged, and murdered Bosnian civilians in towns and concentration camps throughout Bosnia and Herzegovina from 1992 – 1995.  It is important to note that the song was banned by former Yugoslav authorities for inciting ethnic hatred, and even the Serbian parliament officially rejected it as a national anthem due to its provocative lyrics and history.

Mr. Secretary, as citizens of the world, and survivors of genocide, we hereby ask that you immediately remove this provocative and hurtful song from all websites associated with the United Nations. We further ask that an official inquiry be made regarding the organization of this event, in order to ensure full accountability of those responsible for adding this song to the program. We also ask that you immediately suspend Mr. Vuk Jeremic from his role as the President of the 67th Session of the United Nations General Assembly. As a supporter of this fascist song, and a proponent of extreme nationalism, Mr. Vuk Jeremic is no longer fit to serve as President of the United Nations General Assembly.

Because of the shameful role of the United Nations in the genocide committed by Serb forces in cities across Bosnia and Herzegovina, it is imperative that the United Nations rights the wrongs and rejects all elements of Serb ultra-nationalism, and sends a clear message that hatred and provocation of genocide victims will not be tolerated.