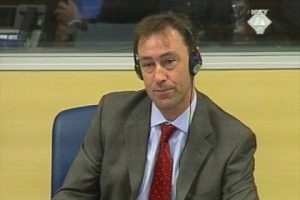 David Harland, Executive Director of the Center for Humanitarian Dialogue and head of UN Civil Affairs in Bosnia-Hercegovina in 1993-1995, recently published, in the New York Times, a polemic against the International Criminal Tribunal for the former Yugoslavia (ICTY). Responding to the recent acquittals of Croatia’s Ante Gotovina and Mladen Markac and Kosovo’s Ramush Haradinaj, he accused the Tribunal of ‘selective justice’ on the grounds that it has essentially only convicted Serb perpetrators, acquitted non-Serb perpetrators and failed to punish crimes against Serbs. This is, of course, the claim that hardline Serb nationalists and supporters of Slobodan Milosevic have been making for about the last two decades. Instead of carrying out any research into the actual record of the ICTY in order to support his thesis, Harland simply repeats a string of cliches of the kind that frequently appear in anti-Hague diatribes by Serb nationalists.

1) Harland writes: ‘More Serbs were displaced — ethnically cleansed — by the wars in the Balkans than any other community. And more Serbs remain ethnically displaced to this day.’

Harland doesn’t provide any statistical evidence to support this claim, but he appears to be conflating being ‘displaced’ with being ‘ethnically cleansed’, and to count all Serbs displaced by all the wars in Croatia, Bosnia and Kosovo as having been ‘ethnically cleansed’ – as opposed to being evacuated by the Serb authorities themselves, for example, or fleeing Sarajevo to escape the siege. The Appeals Chamber of the ICTY, in acquitting Gotovina, Markac and Haradinaj, rejected the prosecution’s claims that a Joint Criminal Enterprise (JCE) existed, on the part of either the Croatian or the Kosovar Albanian perpetrators, to bring about the removal of the Serb population from either ‘Krajina’ or Kosovo. Harland has not attempted to address the Appeal Chamber’s conclusions. He has simply re-stated a falsehood after two panels of judges carefully explained why the claims on which it was based are false.

2) Harland writes ‘Almost no one has been held to account [for these crimes against Serbs], and it appears that no one will be… Convicting only Serbs simply doesn’t make sense in terms of justice, in terms of reality, or in terms of politics.’

It is untrue that nobody has been convicted by the ICTY for crimes against Serbs, or that no non-Serbs have been convicted. Bosniaks, Croats and Albanians convicted of crimes against Serbs include Rasim Delic, the top Bosnian army commander in 1993-1995; Enver Hadzihasanovic, former commander of the Bosnian army’s 3rd Corps; Amir Kubura, former commander of the 7th Muslim Mountain Brigade; Zdravko Mucic, Hazim Delic and Esad Landzo, former commanders and guard for the Celebici prison-camp; and Kosova Liberation Army camp guard Haradin Bala. Former Croatian Army major-general Mirko Norac was indicted by the ICTY for crimes against Serb civilians in the Medak Pocket in September 1993; his case was transferred to the Zagreb District Court, which convicted him.

Harland appears here to be following the example of the extreme Serb nationalists who divide all former Yugoslavs into ‘Serbs’ on the one hand and ‘friends of the West’ on the other, and who claim that the ICTY ‘persecutes’ Serbs because they are independent of the West. Yet two of the most senior Serb officials to be convicted by the ICTY, former Republika Srpska president Biljana Plavsic and former Yugoslav Army chief of staff Momcilo Perisic, had pursued friendly relations with the West in the second half of the 1990s. On the other hand, being unfriendly to the West is scarcely something of which other prominent Serb indictees can be accused, since Western and Serb officials spent the best part of the 1990s collaborating with one another.

4) Harland writes: ‘Convicting only Serbs simply doesn’t make sense in terms of justice, in terms of reality, or in terms of politics. The Croatian leaders connived in the carve-up of Yugoslavia, and contributed mightily to the horrors on Bosnia and Herzegovina. I witnessed for myself the indiscriminate fury of the Croatian assault on the beautiful city of Mostar.’

Harland either does not know, or chooses not to mention, that the ICTY is currently prosecuting a group of prominent Bosnian Croat perpetrators for crimes carried out in Bosnia: Milivoj Petkovic, Jadranko Prlic, Slobodan Praljak, Bruno Stojic, Valentic Coric and Berislav Pusic. They are specifically being tried over the Croatian attack on Mostar. The ICTY has already convicted a large number of Croat perpetrators, including Dario Kordic, wartime leader of the Croatian Democratic Union in Bosnia and vice-president of the Croat Community of Herceg-Bosna, and Tihomir Blaskic, former commander of the (Bosnian) Croat Council of Defence (hence equal in rank to the Bosnian Serbs’ Ratko Mladic) and inspector in the General Inspectorate of the Croatian Army. NB Blaskic spent longer in prison than any Yugoslav army officer sentenced over the 1991-1992 Croatian war, except Mile Mrksic.

5) Harland continues: ‘The Bosnian Muslim leadership had deeply compromising links to the international jihahist movement, and hosted at least three people who went on to play key roles in the 9/11 attacks on the United States. I witnessed attacks by foreign mujahedeen elements against Croat civilians in the Lasva Valley.’

The accusation regarding the Bosnian government’s supposed links to the international jihadist movement and 9/11 attackers is sheer Islamophobic defamation. As regards the mujahedin, Harland either does not know, or chooses not to mention, that Rasim Delic, commander of the Bosnian army from June 1993 until the end of the war, was convicted by the ICTY over crimes carried out by the mujahedin against Serb civilians. On the other hand, the ICTY Appeals Chamber found in the case of Bosnian army 3rd Corps commander Enver Hadzihasanovic that he could not be held culpable for the crimes of the mujahedin, since ‘the relationship between the El Mujahedin detachment and the 3rd Corps was not one of subordination. It was quite close to overt hostility since the only way to control the El Mujahedin detachment was to attack them as if they were a distinct enemy force.’

As with the Croatian attack on Mostar, so with the Bosnian government and the mujahedin, Harland’s portrayal of the ICTY as simply having ignored the crimes in question reflects either an extraordinary degree of ignorance regarding the ICTY’s record, or is deliberately deceptive of his readers.

6) Harland continues: ‘And the Kosovar Albanian authorities deserve a special mention, having taken ethnic cleansing to its most extreme form — ridding themselves almost entirely of the Serb and Roma populations. Kosovo’s ancient Christian Orthodox monasteries are now almost the only reminder of a once-flourishing non-Albanian population… Haradinaj has been cleared of the charges brought against him, but the fact remains that hundreds of thousands of Serbs — mostly the elderly, women and children — were ethnically cleansed from Kosovo by the Kosovar Albanians.’

Again, Harland does not attempt to address the ICTY judges’ refutation of the claim that Kosovar Albanians had engaged in a ‘Joint Criminal Enterprise’ to remove the Serb and other non-Albanian population from Kosovo. His claims that the Kosovar Albanian authorities have succeeded in ‘ridding themselves almost entirely of the Serb and Roma populations’ and that ‘hundreds of thousands of Serbs — mostly the elderly, women and children — were ethnically cleansed from Kosovo by the Kosovar Albanians’ are further falsehoods: of the roughly 200,000 Serbs living in Kosovo before 1999, roughly half are still there.

7) Harland concludes: ‘What has happened at the tribunal is far from justice, and will be interpreted by observers in the Balkans and beyond as the continuation of war by legal means — with the United States, Germany and other Western powers on one side, and the Serbs on the other.’

To which one can reply: only by anti-Western Serb-nationalist politicians and ideologues and their fellow travellers.

Perhaps the most disgraceful statement in Harland’s tissue of falsehoods is his claim that ‘I lived through the siege of Sarajevo.’ In fact, as the UN’s head of Civil Affairs in Bosnia from June 1993 until the end of the war, Harland was scarcely a victim of the siege. Following the Markale massacre in Sarajevo of 28 August 1995, when Serb shelling killed 37 civilians, Harland engendered the myth that the Bosnians themselves might have been responsible; as he testified, ‘I advised [UN commander] General Smith on that one occasion to be a little unclear about what we knew about the point of origin of the mortar shell that landed on the Markale market-place in order to give us time, give UNPROFOR time, to get UNPROFOR and UN people off Serb territory so they couldn’t be harmed or captured when General Smith turned the key to authorise air-strikes against the Serbs. That is true. That was less than fully honest.’

Indeed, the UN in Bosnia collaborated with the Serb besiegers of Sarajevo and helped to maintain the siege. It obstructed any possibility of outside military intervention to halt the genocide. It maintained an arms embargo that prevented the victims of the genocide from defending themselves properly. It was complicit in the murder of Bosnian deputy prime-minister Hakija Turajlic by Serb forces in January 1993. It abandoned the ‘safe areas’ of Srebrenica and Zepa to Mladic’s genocidal operations. Romeo Dallaire said of the UN, ‘Ultimately, led by the United States, France and the United Kingdom, this world body aided and abetted genocide in Rwanda. No amount of its cash and aid will ever wash its hands clean of Rwandan blood.’ The same could be said of the UN with regard to Bosnia and Bosnian blood. Yet no former UN or other international official has been prosecuted by the ICTY or any other court for complicity in genocide or war-crimes. That is a real scandal of selective justice about which Harland has nothing to say.