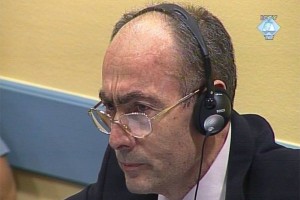 On behalf of the survivors and witnesses of the 1992 – 1995 aggression against the Republic of Bosnia and Herzegovina and the genocide against the Bosniak people, we welcome the International Criminal Tribunal for the Former Yugoslavia’s conviction and sentencing to life imprisonment of former Serb General Zdravko Tolimir for genocide, participation in genocide, extermination, crimes against humanity, and violations of the laws and customs of war.

We believe that this ruling by the International Criminal Tribunal for the Former Yugoslavia (ICTY) is vital in establishing the truth about the crimes committed in Bosnia-Herzegovina and important to the Bosnian citizens and to the International Community. We also believe that this ruling is of paramount significance to finally bringing justice for the victims and survivors of genocide in Bosnia-Herzegovina and around the world.

The importance of the court ruling can be summarized in the following main conclusions reached by the tribunal:

1)      General Zdravko Tolimir is guilty of planning, instigating, and ordering genocide to be carried out by Serb forces against Srebrenica’s Bosniak boys and men and for ordering the forced removal of the remaining women and children.

2)      There had been a clear Bosnian Serb policy for the forced removal of Bosniak civilians from the U.N. Safe Areas of Srebrenica and Zepa and General Tolimir was part of the joint criminal enterprise that faithfully carried out this policy. In Srebrenica and Zepa, General Tolimir supervised the Bosnian Serb Army’s carrying out of Directive 7 which was signed by former Republika Srpska Presdient Radovan Karadzic who is also on trial for genocide, crimes against humanity, and war crimes.  According to conclusions reached by the ICTY Trial Chamber, Directive 7 instructed the Bosnian Serb Army to create such harsh conditions for the Bosniak populations living inside the U.N.  Safe Areas that they would not be able to survive. Part of the Directive was the systematic interception of humanitarian aid headed for the enclaves.

3)      General Tolimir’s participation in the joint criminal enterprise included the supervision of the murder of Bosniak community leaders and intellectuals in Zepa, the killing of small and large groups of Bosniak prisoners in Srebrenica, the torture and abuse of Bosniak civilians seeking refuge in the U.N. base in Potocari, and the eventual burial and reburial of the corpses of the Bosniak victims that were murdered in the genocide that followed the fall of the Srebrenica Safe Area. Taken together, the organized murders and forced displacement of Bosniak civilians in Srebrenica and Zepa had the goal of destroying the Bosniak populations living in these two enclaves.

This verdict presents the best response to all those who continue to deny the Srebrenica genocide. On behalf of the survivors and witnesses of the aggression against the Republic of Bosnia and Herzegovina and the genocide against the Bosniak people, we expect that Radovan Karadzic and Ratko Mladic will also be found guilty of genocide and sentenced to life imprisonment.