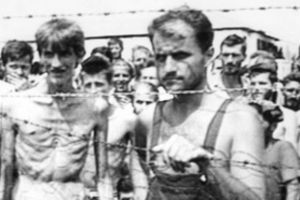 Omarska – known as one of the most notorious concentration camps during the war of aggression on BiH, was one of many camps set up in northern BiH to rid the country of non-Serbs. During the spring and summer of 1992, approximately 3,334 non-Serb inmates were held in appalling and brutal conditions, tortured and killed. The evidence of torture and killings of detainees at Omarska, collected by a UN commission of experts, led to the establishment of an international war crimes court known as the International Criminal Tribunal for the former Yugoslavia. On December 1, 2005, at a press conference in Banja Luka, ArcelorMittal (represented by Mr. Will Smith, Ms. Petra van Helden and Mr. Mladen Jelaca) announced that a Memorial Center would be built and financed by the ArcelorMittal.

The current Mayor of Prijedor, Marko Pavic, stated that a memorial in Omarska would undermine relations between different ethnic groups in Prijedor. This type of genocide denial
is an additional burden threatening the lives of many returnees and survivors of concentration camps, ethnic-cleansing, crimes against humanity and genocide and it is deteriorating progress in regards to human rights and fundamental freedoms in the Prijedor municipality. The returnees and survivors over the years have faced a number of challenges but have reached a pivotal point this year by not being allowed to visit the Omarska site and hold a peaceful commemoration.

Annex 7 of the Dayton Peace Accords guarantees all returnees and survivors the right to a safe home without harassment, intimidation, persecution, or discrimination, particularly on account of their ethnic origin, religious belief, or political opinion. At the same time, it guarantees the respect for human rights and fundamental freedoms which include the prevention and prompt suppression of any written or verbal incitement, through media or otherwise of ethnic or religious hostility by public officials. By not allowing concentration camp survivors to enter Omarska and by not building a memorial as you have promised, you are violating the United Nations Universal Declaration of Human Rights which you claim to support. In addition, the ArcelorMittal Human Rights Policy clearly states that “We seek to respect human rights and to develop an understanding of the cultures, customs and values that prevail in our local communities by developing an inclusive and open dialogue with the people affected by our operations. The ArcelorMittal Community Engagement Standard requires us to conduct an open and inclusive dialogue with local communities, including engaging with often under-represented groups such as women and Indigenous Peoples.”

“Never Again” represents international commitment that no population will ever again be subjected to genocide. Concentration sites and sites of mass killings have become commemorative memorials, preserving the memory of the horrors that happened there and are reminders of the atrocities that can occur when human rights are abandoned.

Your current policy regarding Omarska is irresponsible, dangerous, and amounts to a policy of appeasement and genocide denial which leads to a perpetual crisis that endangers the stability of the entire Southeast Europe region. We strongly urge you to exercise corporate responsibility and deliver what you have promised to the victims of the Omarska concentration camp.

Haris Alibasic, MPA
President of the CNAB Board of Directors
http://www.bosniak.org