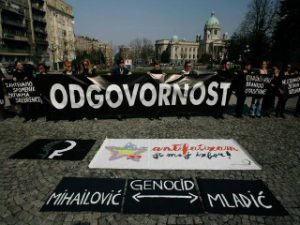 The Congress of North American Bosniaks (CNAB) strongly condemns all efforts by the government of the Republic of Serbia to rehabilitate Chetnik general and convicted war criminal Dragoljub “Draza” Mihailovic.

In the Second World War, General Mihailovic was the leader of the Chetnik Detachment of the Yugoslav Army – commonly referred to as the Ravna Gora Chetniks. The Chetniks were a Serbian fascist and ultra-nationalist military organization that collaborated with the Nazis and targeted Yugoslav Partisans and non-Serbs living in Serbia and Bosnia-Herzegovina for extermination. Under Mihailovic’s command, the Chetniks collaborated with the Axis powers and committed horrendous war crimes and crimes against humanity against Bosniak and Croat civilians living in Serbia and Bosnia-Herzegovina. The Chetniks murdered an estimated 60,000 civilians and burned several hundred small Bosnian towns and villages to the ground in an attempt to terrorize the civilian population and ethnically cleanse Bosniaks and Croats from their homes in order to form an ethnically pure greater Serbian state. After the war, the Yugoslav authorities apprehended General Mihailovic; following a trial he was convicted of treason and war crimes and was executed.

The fascist Chetnik ideology resurfaced in Bosnia-Herzegovina during the 1992-1995 war and genocide as Serb forces committed ethnic cleansing and genocide against Bosniak civilians in a renewed effort to form an ethnically cleansed greater Serbian state. This virulent and destructive fascist ideology is still alive and enjoys considerable support among far-right Serbian organizations operating in Serbia and Bosnia-Herzegovina. It presents a clear danger to Bosniak and Croat civilians living in Bosnia-Herzegovina and to peace and stability in the Balkans.

Rehabilitating Mihailovic would signal that the Serbian government condones the fascist Chetnik ideology that has resulted in the deaths and forced displacement of hundreds of thousands of civilians and that it approves of the war crimes and crimes against humanity that were committed by troops under Mihailovic’s command. It would be a grave insult to victims of fascism as well as to survivors and all those who fought fascism, including Serbians, in Yugoslavia during the Second Word War. It would further tarnish Serbia’s international standing as a country that celebrates war criminals and creates instability and tensions in South-Eastern Europe. It could also signal a resurgence in far-right movements in Serbia that could in turn embolden similar movements in other European countries, leading to future rehabilitation attempts of NAZI and fascist war criminals in other European countries.

We ask that non-governmental human rights organizations in the US, Europe, and particularly in Serbia join us in condemning attempts by Serbian authorities to rehabilitate fascist war criminals and revise history in favor of fascism in the Balkans and the rest of Europe.