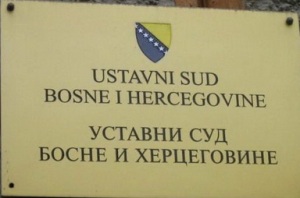 We are writing to you, representatives of the institutions whose primary function is to protect the human rights and dignity of citizens of Bosnia and Herzegovina, and regarding the recent vote on the Census legislation from which the Article 48 was deleted. As I am sure you are aware this Article anticipated that the results of the ethnic structure of population from Census of 1991 would apply during the formation of government until the full implementation of Annex 7 of the Dayton Peace Agreement, or until the return of refugees and displaced persons to their homes.

We would like to take this opportunity to remind that the Census without the Article 48 would entail strict offense to the basic human rights as explained in the European Convention on Human Rights on the Return of Refugees to their homes in dignity, freedom, equality, peace, justice, tolerance, and reconciliation, This is the basis needed to create peaceful relations within a pluralist society. Also, under the Article II of the Constitution of Bosnia and Herzegovina, the European Convention on Human Rights and fundamental freedoms in the Convention are the basic principles of the Constitution and as such have even higher priority over other laws. Relying on these principles, we would like to point out the obvious contradiction, not only in regards to the very structure of the ‘Dayton Bosnia’, where the creation of the entities creates the inequality among citizens of Bosnia and Herzegovina, but also the defective implementation of this Agreement, primarily of the Annex 7 which specifies the appropriate circumstances for the return of refugees and displaced persons in the accordance with the European Convention on Human rights.

Annex 7 is not implemented due to lack of certain conditions for return. Bosniaks and other citizens of Bosnia and Herzegovina cannot return to their homes in the smaller [Serb-controlled] entity because they have to deal with the daily humiliation and attack on their dignity to live as citizens of a lower rank, and who are constantly humiliated and discriminated against by the institutions whose symbols represent only one ethnic group. Furthermore, returnees conditions for socio-economic equality in society where they are not adequately represented in the political system of the smaller entity. To return, Bosniaks and other citizens of Bosnia and Herzegovina who were forcibly exiled require absolute confidence in peace, security and respect for basic human rights. The conditions for peace and security are threatened, and there still exist occasional physical attacks on Bosniaks, their property and religious buildings. Among the main obstacles to justice and reconciliation is the denial of genocide and crimes against Bosniaks as additional deterrent for the returnees. Such an attitude towards the war events created difficult conditions for the safe return of Bosniaks to their homes and reconciliation and coexistence with its neighbors, which is required in the European Convention and in Annex 7 of the Dayton Accords.

Due to these facts about the severe shortcomings of normal conditions for the return of refugees, Annex 7 could not be conducted without being in violation of the Dayton agreement and the Bosnian Constitution, which was established in Annex 4 of this Agreement. Accordingly, we deem it necessary to officially investigate the following questions:

1. The legality and compliance of the law on the census without the article 48 which refers to the implementation of Annex 7 as a prerequisite for the census.

2. The legality of the implementation of Annex 7 of Dayton agreement as a prerequisite for basic human rights of citizens in non Serbian small entities.

On behalf of the victims of genocide and expelled Bosniaks in Diaspora and the homeland, we hope you will carefully consider our request in accordance with democratic priorities and beliefs that you represent.

Prof. Emir Ramic, Chairman of the Institute for Research of Genocide, Canada

Prof. Dr. Muris Osmanagic, On behalf of the Open Panel of Intellectuals for Constitutional Reforms in Bosnia and Herzegovina