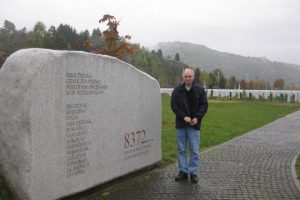 Michael Dobbs responded to criticism from CNAB regarding genocide definition. Last week, CNAB, IRGC, and BAGI sent a joint protest letter to USHMM regarding what appeared to be questioning of the genocide definition by Michael Dobbs pertaining to the systematic murder of more than 8,000 Bosniak civilians in Srebrenica by Bosnian Serb and Serbian forces. CNAB expressed concerns to the Committee on Conscience of the U.S. Holocaust Memorial Museum, which is sponsoring Mr. Dobbs project called “Mladic Files”, because of the following statement:

“I must admit that I find it difficult to use the word genocide, which conjures up images of the Holocaust. ” (read the full post here)

While we never questioned Mr. Dobbs’ acceptance of the occurrence  of these crimes against Bosniaks, we did express concerns about his hesitation to use the  term “genocide. Most of Mr. Dobbs’ reporting regarding the Srebrenica genocide is highly commendable (just read his latest post slamming the pro-Serb genocide denier  “Srebenica historical project).  However,  using incorrect terminology such as “massacre” is very damaging to the victims of genocide because it fails to portray the full intent of the Serb army to annihilate the population of this enclave.

In today’s blog response, Mr. Dobbs clarified his position that he agrees with the classification of Srebrenica genocide by the courts stating:

“While I do not agree with all the opinions handed down by the Yugoslav War Crimes Tribunal, I agree with the conclusion of the judges that the Srebrenica massacre met the legal definition of “genocide,” as defined by the United Nations Convention. ” you can read the full blog post here .

We appreciate Mr. Dobbs clarifying his position on genocide and we urge him to be more consistent in his use of the word  (instead of “massacre”) when describing the horrific genocide against Bosniaks in July 1995 in Srebrenica.  While to some it may appear insignificant, from an international law perspective it has significant implications on preserving the truth about the agression on Bosnia and Herzegovina, genocide against Bosniaks. Furthermore, there can be no peace or reconciliation in the region without full acceptance of responsibility for these actions.