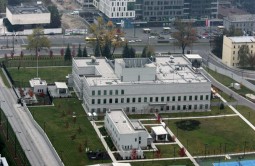 The Congress of North American Bosniaks strongly condemns the attack that occurred at the United States Embassy in Sarajevo, Bosnia and Herzegovina (BiH) today. The news sources report that an armed attacker identified as Mevlid Jasarevic, who is originally from Novi Pazar, Serbia opened fire on the U.S. Embassy, injuring at least one police officer.  CNAB is thankful for the swift response and bravery of the Bosnia and Herzegovina police and special forces, and reaction to the attack. We are thankful that no one inside the Embassy was hurt and our thoughts and prayers are with those police officers who were injured in this senseless attack.

We are outraged and deeply saddened by this act of violence against the U.S. Embassy and the citizens of Bosnia and Herzegovina. Bosnia and Herzegovina values the importance of the strategic partnership and the role that the United States has played in BiH, and the support BiH continues to receive from the United States. We urge the authorities to immediately investigate the and take necessary measures to bring to justice all those responsible.