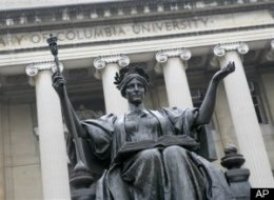 Tuesday’s lecture by the genocide denier and president of the smaller of the two political entities of Bosnia and Herzegovina, Milorad Dodik, was a slap in the face to the victims of genocide. It is astonishing that Columbia would allow him the platform to spread his lies and propaganda regarding the war in Bosnia and Herzegovina, despite protests by victims of genocide and organizations like the Congress of North American Bosniaks, Bosniak American Advisory Council for Bosnia and Herzegovina, Bosnian American Genocide Institute and Education Center, and Institute for the Research of Genocide, Canada. It is maybe even more disturbing that he was accompanied by Darko Trifunovic, a well known genocide denier and leading Islamophobe in Europe, under the guise of academia. It seems that your honorable publication forgot to do the homework on this person and painted a rosy picture of his willingness to talk to the protestors.

Trifunovic is one of the main genocide deniers who, in a report published in 2002, accused the wives and mothers of Srebrenica of filing falsified reports about missing relatives and alleged that “less than 100 Muslim soldiers” had been executed at Srebrenica. Trifunovic also tries to portray himself as a “terrorism” expert and has on numerous occasions tried to promote the Serb nationalist agenda and justification of their aggression towards Bosnia by painting many Bosnian Muslims as members of the so-called “white al Qaeda.” It is a disturbing trend that he and another controversial “scholar,” Srdja Trifkovic, have tried to promote as part of the global anti-Muslim agenda. It should be noted that Srdja Trifkovic was denied entry into Canada earlier this year when he was scheduled to give a lecture at the University of British Columbia due to his role as a genocide denier and a spokesperson for Radovan Karadzic, the butcher of Bosnia. Karadzic is being tried at The Hague for war crimes, genocide, and crimes against humanity, among other charges.

It was disappointing to hear that many Bosniak Americans were denied entry to the lecture being held by Dodik even though they received confirmation of their registration. It is difficult to believe that discrimination did not take place given that so many of the protesters were denied access to confront the Republika Srpska president.

Lastly, I would like to draw attention to the perceived pro-Serbian bias that was apparent in the organization of this event and the high likelihood of conflict of interest, given that Columbia received significant Serbian funds in the establishment of the “Njegos endowment.” Dodik’s lecture at Columbia can therefore be seen as a favor to Serbian nationalists for their generous financial contribution.

Spokesperson for the Congress of North American Bosniaks