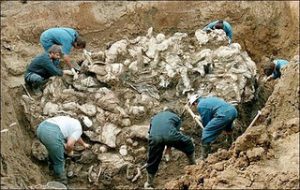 Milorad Dodik threatens the peace, stability and economic prosperity of the entire Balkans region by purposely undermining Bosnian state authorities and threatening “secession” whenever it suits him politically. The Republika Srpska entity was created by the Dayton agreement through war time policies of genocide and ethnic cleansing while under the leadership of the now imprisoned war criminal Radovan Karadzic. Milorad Dodik’s rhetoric of genocide denial and obstructionism is very similar to Karadzic and remains a threat to long term peace and stability.

Milorad Dodik repeatedly denies genocide against the Bosnian people and said in an April, 2010 interview for a Belgrade newspaper “Bosnian Serbs will never accept that the 1995 Srebrenica massacre of some 8,000 Muslims was genocide.” Furthermore, he added that “We cannot and will never accept qualifying that event as genocide.” By denying genocide, Dodik is effectively blocking all attempts at peace and reconciliation in Bosnia and Herzegovina and the region. The Srebrenica massacre has been ruled as genocide by two international courts — the International Court of Justice (ICJ) and the International Criminal Tribunal for the Former Yugoslavia at The Hague (ICTY). In 2005,the United States congress passed the House resolution 199 recognizing the Srebrenica genocide and demanding that war criminals be brought to justice.

Your company’s social responsibility statement reads that you “are committed to operating in a manner that promotes the business goals of our clients while advancing workplace diversity, environmental sustainability and the well-being of the communities in which we work and live.” By allowing a genocide denier to promote his agenda in a public forum sponsored by your company, you are causing an incomprehensible anguish to thousands of Americans of Bosnian decent who lost thousands of loved ones through a campaign of genocide, ethnic cleansing, and torture.

We sincerely hope you will listen to our serious concerns and look forward to hearing back from you.