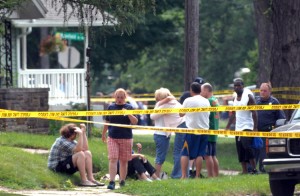 In this grave hour my words cannot express the sorrow and the sense of sadness about the most recent events of the last night. Speaking on behalf of the Bosnian community of our great city and as a Grand Rapidian myself, I can only imagine the impact of the news; it certainly is the wrong way to put our city on the national map.

As a member of an ethnic community that has suffered a great loss and has gone through a long grieving process itself, I understand the complexity of this situation and its implications for the city government and officials.

Personally, I want you to know that you have a full and whole-hearted support from your Bosnian-American constituents and that we are keeping you and the families who suffered a tragic loss in our thoughts and prayers.

Formally, on behalf of the Michigan chapter of the Congress of North American Bosniaks (CNAB) I wish to express our sincere condolences and deepest sympathies to the families who lost loved ones yesterday in a senseless act of violence. We are proud of the bravery and selflessness of our law enforcement officers, first responders and emergency personnel in protecting citizens.