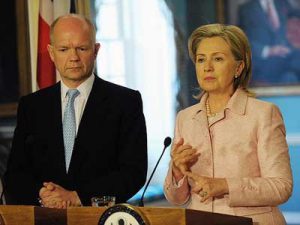 Reaction to the joint letter by the UK Foreign Secretary William Hague and US  Secretary of State Hillary Clinton about future progress for Bosnia and Herzegovina.

The Congress of North American Bosniaks welcomes the joint op-ed message of unity and commitment published in newspapers throughout Bosnia and Herzegovina on June 7, by the U.S. Secretary of State Hillary Clinton and U.K. Foreign Secretary William Hague. In the mixed message of concern, hope, determination and optimism, the foreign ministers warned of the dangers of extreme nationalism coming from the Republika Srpska entity and called for the international community to re-focus their attention on Bosnia and Herzegovina and their path to EU and NATO membership. We also applaud the renewed commitment to protect the sovereignty of Bosnia and Herzegovina and the rights of its citizens to a functioning government and economic prosperity. CNAB has, on several occasions, called attention to the transgressions of the Republika Srpska representatives and their agenda to undermine Bosnian sovereignty and seek secession from Bosnia and Herzegovina. They continue to abuse the Dayton Agreement without fear of consequences.

We must, however, call attention to a missed opportunity by the foreign ministers to fully connect the dots that are the root cause of instability in Bosnia and Herzegovina. Serb nationalism in Bosnia does not operate in a vacuum, but is in fact, part of a larger nationalist apparatus with strong and direct ties to Serbian government. We must not forget that the war in Bosnia and Herzegovina was not a civil war, but a war of Serbian aggression upon a UN chartered and recognized independent and sovereign state of Bosnia and Herzegovina. Slobodan Milosevic orchestrated the campaign for creation of a greater Serbian state by actively funding and supporting military efforts against non-Serb populations in Bosnia and Herzegovina. Serbian army actively participated in military campaigns in Bosnia alongside the military formations of the illegal regime of Republika Srpska, created by Radovan Karadzic, who is now on trial for war crimes and genocide at The Hague. Although these evil men are no longer in power, finishing their careers behind bars, the ideology still remains and is symbolized by the entity that was created through an organized campaign of genocide and ethnic cleansing. It should not come as a surprise that the representatives of that entity are now doing all they can to undermine the stability and sovereignty of the country they fought against.

Foreign ministers are correct that too much international focus has been given to other areas of the world, particularly Middle East and Afghanistan over the last decade, allowing the Serbian nationalist apparatus to recharge and refocus their efforts to “finish the job” that Radovan Karadzic and Ratko Mladic began, and carve up Bosnia and Herzegovina under the very nose of the European Union and the United States. Lack of stronger international military presence in Bosnia has severely undermined the ability of the international community to enforce the Dayton agreement and protect the Bosnian sovereignty accordingly. Furthermore, the Office of the High Representative (OHR) continues to be shunned by the Bosnian Serb politicians and undermined by the EU officials who do not provide the political willpower necessary for OHR to do its job. This was particularly evident in the latest drama caused by Milorad Dodik who threatened to hold a referendum opposed by the OHR, yet powerless to prevent due to lack of political support in the EU. It was not until EU Representative Catherine Ashton showed up unexpectedly that Dodik decided to put the efforts on hold, coming out victorious because he successfully undermined the OHR, and came out in a stronger position than before. The appeasement of the Serb nationalists in Bosnia and Herzegovina and Serbia remains the biggest threat to peace and stability in the region.

Furthermore, we are distressed by the perceived assessment of progress that the countries of the western Balkans, particularly Serbia, are making toward euro-Atlantic integration, because that “progress” has been made at the expense of Bosnia and Herzegovina. Serbia has for years harbored and protected Karadzic and Mladic and have only given them up in order to gain concessions from the EU. Furthermore, Serbia continues to violate human rights of its minority Bosniak populations in Serbia, particularly in the Sandzak region. Most alarmingly, the Serbian people are still in denial over Serbian atrocities against Bosniaks and other non-Serb populations. According to the latest poll results announced by the Serbian National Council for Cooperation with ICTY, more than half of the Serbian population is opposed to the arrest of Ratko Mladic, the “Butcher of Bosnia”. These actions and polls do not indicate a significant shift in Serbian ideology, but more of a pragmatic diplomatic move to trade the war criminals for political concessions. The logic is that by placing the blame to only a few individuals, Serbia will avoid any legal consequences for the Serbian state or even the RS entity in Bosnia and Herzegovina. CNAB strongly believes that the main conditions for Serbian and Croatian membership in the EU or NATO must be predicated on the success of Bosnia and Herzegovina and  its foremost entry into the EU. The nightmare scenario would be a Serbian membership in the EU and its ability to then influence EU authorities to further destabilize the state institutions in Bosnia and Herzegovina.

Likewise, it is evident that the extremist ultra-nationalist ideology is alive and well in Republika Srpska at all levels of government. The deterioration of direct involvement of the United States and the European Union in keeping the lid on Serb extremists has led to fostering an environment where genocide denial is open and unapologetic, and war criminals are being defended from the tax revenues of Republika Srpska. High Representative Inzko rightfully condemned as unacceptable that Republika Srpska officials have set aside €50,000 for defense of Ratko Mladic. This means that genocide victims who returned to their homes in Republika Srpska, including mothers of Srebrenica, are now funding the defense of a despicable war criminal.

It is imperative that the message of commitment to Bosnia and Herzegovina is more than just rhetoric and is followed up by concrete strategic and tactical steps to ensure progress on path to euro-Atlantic integration. It is clear that those steps will not be taken by the Republika Srpska representatives without a strong international presence to pressure them to give up on their ideology of hatred and accept the fact that they must coexist in a multi-ethnic sovereign and independent Bosnia and Herzegovina. Without the enforcement, the message will fall on deaf ears and we will continue to witness further deterioration of stability and increased nationalist tensions. Any attempt to break up Bosnia and Herzegovina will lead to more violence and bloodshed, yet the status quo remains unacceptable because it unfairly holds the Bosnian citizens hostage to agendas that do not have a place in the 21st century. Stronger U.S. and EU involvement is needed to remove the barriers to peace and reconciliation.

Last month, CNAB sent a letter to the members of the United States Congressional Caucus on Bosnia and Herzegovina calling for constitutional reforms and an international conference to resolve the issues plaguing Bosnia today. Such efforts must recognize that the Dayton Agreement was never properly enforced and that it needs to be reformed based on civil and democratic principles, not on politics of ethnic divisions and hatred. Reforms must establish a society where human rights are guaranteed as part of the international mandate, and no ethnic group or minority feels left out of the process. Only through such reforms will Bosnia and Herzegovina be able to take the necessary steps for euro-Atlantic integration and take its rightful place in the  international community.