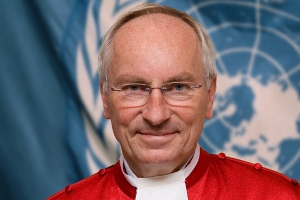 The Congress of North American Bosniaks, an umbrella organization representing the interests of 350,000 American and Canadian Bosniaks, the Institute for Genocide Research Canada (IRGC) and the Australian Council of Bosnian Herzegovina Organizations (ACBHO) request that the ICTY Court remove Judge Flügge from his role in the proceedings against Ratko Mladic, or in any case dealing specifically with charges of genocide. We are surprised that Judge Flügge would be once again assigned to a case dealing with charges of genocide due to his unapologetic comments in 2009 in the German weekly magazine “Der Spiegel” in which he openly questioned the classification of Srebrenica genocide.

According to the “Der Spiegel” article, Judge Flügge shockingly stated that “the term genocide to define these crimes is unnecessary” instead preferring to refer to it as “mass murder”. He claimed that there is no reason to differentiate between “a group that is murdered for their nationality, religion, ethnicity, or race, as is regulated by the Hague Statute” and a group that “happens to be gathered at a specific location”.

CNAB requested a complete retraction of the statement made by Judge Flügge because of the fact that the International Criminal Tribunal for the former Yugoslavia (ICTY) has already confirmed, in several cases including the 2007 ruling against Serbia and Montenegro, the classification of the murder of more than 8,000 Bosniaks in Srebrenica as genocide. This fact has also been recognized by organizations and governments across the world, including the U.S Congress in resolutions 199 and 134 on genocide in Bosnia-Herzegovina. Judge Flügge is therefore unable to show impartiality to the case and was in a clear violation of The Hague’s Rule 15(A). His statement also directly violated previous ICTY rulings which confirmed that the atrocities committed against Bosniaks in Srebrenica constitute genocide, in accordance with the definition from the Geneva Convention of 1949. On July 9, 2009, CNAB made the request from ICTY to remove Judge Flügge from the Karadzic case, which they did in September of 2009. We welcomed this news and assumed the matter put the rest until this latest resurrection of assignment of Judge Flügge to another high profile genocide case.

Given that Judge Flügge has not retracted his statements concerning the nature of the Srebrenica genocide crimes, he is not fit to serve as a presiding judge of such a high profile case. The arguments are still the same because the evidence is clear that because he did not unambiguously stand behind the previous ruling of the ICTY regarding the nature of the Srebrenica Genocide, Judge Flügge is unable to show impartiality to the case and is in violation of The Hague’s Rule 15(A):

“A Judge may not sit on a trial or appeal in any case in which the Judge has a personal interest or concerning which the Judge has or has had any association which might affect his or her impartiality. The Judge shall in any such circumstance withdraw, and the President shall assign another Judge to the case.”

For these reasons, CNAB requests that the Court removes Judge Flügge from his role in the proceedings against Ratko Mladic, or in any future case dealing specifically with charges of genocide. It is unacceptable that, one day after the capture of the monstrous war criminal Ratko Mladic, the victims of genocide have to deal with a judge who does not even recognize the true nature of the atrocities that claimed the lives of their loved ones.

Let us conclude with the words of honorable Theodor Meron, former presiding judge of the ICTY from his speech deliver in Potočari on 11 July 2005 at the commemoration of the 10th anniversary of the Srebrenica genocide:

They stripped all the male Muslim prisoners, military and civilian, elderly and young, of their personal belongings and identification, and deliberately and methodically killed them solely on the basis of their identity. The Bosnian Serb forces were aware, when they embarked on this genocidal venture that the harm they caused would continue to plague the Bosnian Muslims.

The Appeals Chamber states unequivocally that the law condemns, in appropriate terms, the deep and lasting injury inflicted, and calls the massacre at Srebrenica by its proper name: genocide. Those responsible will bear this stigma, and it will serve as a warning to those who may in future contemplate the commission of such a heinous act.”