Skip to Content
Home English Rape of Bosnia, A Report From a Concentration Camp 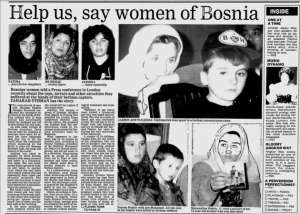 Originally published in the New Strait Times on September 4, 1992.  Re posted on Daniel Toljaga’s blog in order to preserve the truth about the aggression on Bosnia and Herzegovina and the Bosnian genocide.

Help Us, Say Women of Bosnia

Bosniak women told a Press conference in London recently about the rape, torture and other atrocities they suffered at the hands of their Serbian captors. Zaharah Othman has the story.

In a voice devoid of emotion, Bosniak Jasmina Kocarac narrated her traumatic experience at the hands of Serbian soldiers who 15 days earlier had mercilessly killed her husband and her in-laws before her very eyes.

As with other victims of Serbian atrocities, there was no time for Jasmina to shed any more tears, for indeed her more important task now was to tell the world about the systematic ethnic cleansing by the Serbs to wipe out Bosniaks from the map and history of the world.

Jasmina was raped repeatedly by three Serbian soldiers after being arrested and taken to a concentration camp. She was handpicked from a group of women and taken to another room where she said there were naked women who had apparently been raped and sexually molested. She knew she was about to meet the same fate but was mercifully spared the humiliation when she passed out.

She wasn’t lucky the next time round and was fully conscious of the brutal reality that those who raped her were her former neighbours. One of them was the best man at her wedding.

In the same monotone voice Jasmina vowed that she would kill her rapists if she found them.

Jasmina was among a group of Bosniak refugees from Zagreb in Croatia who attended the London Peace Conference recently. Like all the others, she acquired her freedom from the concentration camp in exchange programmes for Serbian prisoners held by Bosniaks.

What happened to Jasmina was by no means an isolated case. According to Fatima Kafedzic, president of the Mothers’ Movement for Peace in Bosnia-Herzegovina, age did not seem to be a deterrent. Gang-raping girls as young as seven years old in front of their mothers and other prisoners offered some kind of morbid pleasure to their Serbian captors.

At a concentration camp in Manjaca, near Banja Luka, seven-year-old Mirma was gang-raped in front of her mother and fellow prisoners. Her distraught mother prayed for her daughter’s death to end her trauma. She died eight hours later.

Others, according to Fatima, were not so lucky. At a hospital in Zagreb, where many Bosniaks are taking refuge, teenage girls are awaiting the birth of unwanted babies. Some have to undergo intense psychological treatment and counselling.

“Members of my movement visited a 13-year-old girl who was raped and tortured. She was in a state of shock and was constantly crying. We told her to try to forget what had happened and try to rebuild her life,” said Fatima, her voice betraying her own conviction of her statement.

A mother of 10 children, Fatima fears for the safety of her daughters who are still in Sarajevo. She was in Austria collecting medical supplies and could not return when trouble broke out. Since then she has lost contact with her husband and six children. From Zagreb, her movement tried to help victims pick up the pieces and start life anew. It also helps rehabilitate children who had lost their parents in the war.

Another tireless figure who spends her time healing the physical and mental wounds of the war victims is Dr Alma Muslic. She said she has seen terrible cases of torture, especially of pregnant women who were brutally knifed in the stomach. And there were, of course, little children who were victims of sniper attacks or who were left orphaned without both parents.

One child who was lucky to have both parents around was Jasmin, 9, but he has to live with the constant nightmarish reminder of his days at the concentration camp in Manjaca.

Jasmin was with his mother Aziza and sister Waleeda, 12, on a abus to his aunt’s house in Dobrinja when they were stopped by Serbian soldiers.

Bosniak passengers were marched off for questioning. Jasmin was repeatedly questioned about who was supplying arms to Bosniaks.

When Aziza was taken away for questioning they threatened to rape her children if she did not co-operate.

It was while she was away that Jasmin witnessed men, who were just skin and bones, being tortured.

At the Press conference in London recently, Jasmin broke down while narrating his story and Waleeda constantly hid her face in her hands in an effort to wipe out the memory.

Earlier, before the start of the conference, a brief separation from his mother proved too much for young Jasmin, whose nagging fear was not seeing his mother ever again.

For Aziza and her children, the peace conference which brought them to London for a brief respite from the troubles in their homeland offered little hope for real peace in Bosnia.

However, they received their first good news in months during their stay in London when they heard that her husband was safe in Sarajevo.

However, for Fatima Hodzic, her husband and the rest of the menfolk in her family perished in a mass killing by Serbian soldiers.

Now, her son, five-year-old Mohamed is the only male survivor in her close-knit family of 35.

Putting her sadness aside, Fatima and the rest of the Bosniak refugees in London recently appealed for women’s organisations, especially from the Muslim world, to help them in any way they can.

“We would like to appeal for financial help to bring back our children who are refugees in Western countries so that we can bring them up as Bosniaks. We do not want them to lose their identity.”