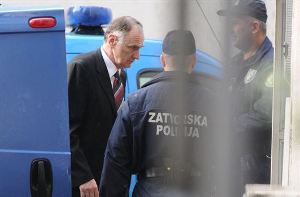 The Congress of North American Bosniaks (CNAB), the Institute for Research of Genocide, Canada (IRGC), and the Bosnian American Genocide Institute and Education Center (BAGI) are appalled by the decision of Montenegro’s Higher Court to acquit those responsible of deportation and mistreatment of Bosniaks during the war in Bosnia and Herzegovina 1992 – 1995.  Judge Milenka Zizic ruled Tuesday that not enough evidence exists to convict the nine former police officers who actively participated in hunting down and deporting to Serb forces in Bosnia more than 79 Bosniak refugees who were subsequently executed.  Judge Zizic further infuriated the victims’’ families by stating that the police officers could not be convicted of war crimes since Montenegro was not formally at war with Bosnia and Herzegovina.

This unjust decision clearly indicates that Montenegro is far away from accepting responsibility for its role in vehemently supporting the war policies of Slobodan Milosevic, who died at the Hague while on trial for war crimes, and Radovan Karadzic who is currently on trial for war crimes during the aggression on Bosnia and Herzegovina. It has been well documented that Serbian and Montenegrin soldiers and reservists were actively involved in the aggression on Bosnia and Herzegovina and the ethnic cleansing and genocide against non-Serb, mainly Bosniak populations.  This effect was particularly felt by Bosniaks living in eastern Bosnia and Herzegovina along the border with Serbia and Montenegro.

Bosniaks who managed to escape the initial attacks by crossing over the border to Montenegro were then hunted down by the Montenegrin police and returned to death camps. Justice must be served and Montenegro must own up to its past and prosecute all those who participated in persecution of Bosniaks in Montenegro and contributed to the ethnic cleansing and genocidal policies. Without justice, there can be no peace and reconciliation in the region. This decision is particularly disturbing given the discriminatory policies against Bosniaks in Montenegro today particularly in the Sandzak region.

CNAB, IRGC, and BAGI strongly condemn this decision and request a full investigation into the judicial process in Montenegro.  We will lobby the American, Canadian, and EU authorities to put pressure on Montenegrin authorities to comply with their obligation to prosecute war criminals. We will also urge the European Union to put an immediate halt to all the Montenegrin aspirations for integration into the European Union until Montenegro shows that it is willing to unconditionally come to terms with the ghosts of its wartime past.