Skip to Content
Home English The Arrest of General Divjak: The Insanity of Serbia Continues 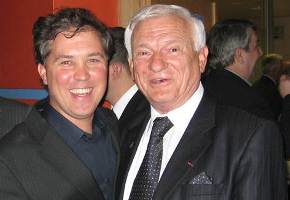 On March 3rd, Jovan Divjak, a former general of the Bosnian army was arrested at the Vienna airport, served with a warrant by Interpol. The country asking for Mr. Divjak’s arrest is Serbia. Since the end of the Bosnian war Serbia has repeatedly proven itself a country full of delusion, paranoia, and denial. Striking a note of sanity, the Foreign Minister of Austria, Michael Spindelegger told the Kurier newspaper that, “according to our international law experts, an extradition to Serbia is inconceivable.” On March 5th, 5,000 people held a rally in Sarajevo demanding immediate release. He will be released, and soon, but still his arrest is wrong to begin with. Serbia should not be allowed to issue any warrants for anyone until they produce the number one war criminal of the Bosnian war, General Ratko Mladic, the man responsible for slaughtering 8,000 men in Srebrenica and for the siege of Sarajevo.

Serbia has made it no secret they want into the EU. They desperately want not to be seen as a pariah State, whose zeal for nationalism so often turns into a persecution complex that becomes violent. I wish them luck. I do. For a healthy Serbia would mean a healthier Balkan region. But if this arrest warrant is any indication of their national psyche then I’m quite certain they will stay on the fringe for a long time.

Here is the interesting twist, in a region full of twists, on Mr. Divjak. He is a Serb, born to Serbian parents in Belgrade. Before the war he was a colonel who served as the Territorial Defense Chief of Sarajevo for the JNA, the Yugoslavian army. But when the bombing began in Sarajevo by the JNA he declared himself a Bosnian through and through and left the Yugoslavian army to join the ragtag civilian militia in Sarajevo that would eventually evolve into the Bosnian army and protect all citizens of Bosnia, whether they are Serb, Croat, or Muslim. He would become the highest-ranking Serb in the Bosnian army, a testimony to both how much he was trusted and to the ethnic diversity inside Bosnia.

The alleged crimes that Serbia is trying to convict Mr. Divjak of deal with a convoy of JNA soldiers who, formally under his command, left Sarajevo, with large amounts of armor. This event is well documented in the BBC’s epic documentary “death of a nation,” but needs some further explaining to understand the bold hypocrisy and insanity in asking for the arrest of Mr. Divjak.

In 1992 Sarajevo was on the brink of war. Similar to the troops in Libya today that are firing upon their own people, the JNA, acting upon orders from Milosevic and Karadzic, began a war upon it’s own people. The city erupted into a battle that carried on for days. Eventually a deal was brokered. The JNA troops would be allowed to leave the city if they left behind some armaments. These arms would become the very first weapons of a brand new Bosnian army, made up mostly of civilians, and some JNA defectors. Mr. Divjak, and others in the JNA, like the Libyan soldiers of today, had a choice: To stay or leave. Mr. Divjak chose to not shoot the very people he spent a lifetime training to protect, regardless of their ethic backgrounds. He chose to leave the JNA and join the fight to save Sarajevo. For that he is a hero in Bosnia.

Serbia alleges that he is responsible for firing upon the convoy of JNA soldiers as they fled town. They allege the 42 soldiers were killed, a highly dubious number since the acting Yugoslavian army General Milutin Kukanjac, who commanded the troops in Sarajevo and left with the convoy, has stated that six died on that day. I have no idea whether Mr. Divjak was involved in the actions of that day that resulted in those six deaths. And quite frankly I don’t care if he did or didn’t. You see, even if a deal was made those soldiers were already committing a crime that would later manifest into a countrywide genocide. These soldiers were the marching boots of Milosevic and Karadzic, two men who carried out murder, rape, and genocide on their own people. In the end these soldiers, and many others, would be responsible for the killing of more than 100,000 people. They would surround places like Sarajevo, Zepa, Gorazde, and others, and systematically try and murder, and starve, everyone inside the besieged cities. They ran the rape camps, where tens of thousands of women suffered in the silence of the dark forests of Bosnia. They ran the torture camps and the death camps. The men who did the shooting are mostly long gone, blended back into civilian life in Serbia fixing cars, running coffee shops, and attending their children’s piano recitals. They will never answer for their actions, at least not in a public courtroom. The leaders are mostly dead or in jail, or going to jail. If, and I say if because we have no idea what happened in 1992 in Sarajevo in those early days of war, General Divjak did decide to shoot on these soldiers as they left town would that mean he is a war criminal? No. It means he saw the writing on the wall and knew it was time to either fight, or die.

I met General Divjak once, in 2009. He attended a ceremony that gave me honorary citizenship of Sarajevo. I knew who he was by reputation but I had not met the man until that night. After the ceremony he couldn’t stop shaking my hand and thanking me for what I did during the war. I told him the same. So many nights as I slept on the seventh floor of the UNIS Towers the general was on the front line trying to repel those whose sole purpose was to kill everyone inside Sarajevo, including me and everyone I knew.

History. Intent. These are two words that get lost in the fog of war. But in the end, right or wrong, history and intent do matter. I imagine those words weighed heavily on the pilots of the Enola Gay until their own deaths of old age. And for the snipers perched on the surrounding mountains of Sarajevo shooting five year olds in the head? Did they believe they were saving their own nation by randomly shooting people in the street? I really don’t know, but I sincerely doubt it. I don’t know the actions of General Divjak in those first few days of the war, but I know his intent. He was trying to save innocent people from being killed by trained soldiers. And for that he remains a hero.

Bill Carter is the author of Fools Rush In, published by Schaffner Press, a memoir of his two years in the Bosnian war. A book the London Times called “Good Morning Vietnam crossed with a Conrad novel.” He is also the director of the award winning documentary Miss Sarajevo, which is executive produced by Bono, who penned the title song, Miss Sarajevo. Carter and U2 did satellite link-ups between U2 concerts and Sarajevo during the 1993 Zooropa tour. Carter is also the author of Red Summer, a four year journey of his time commercial fishing in Bristol Bay.