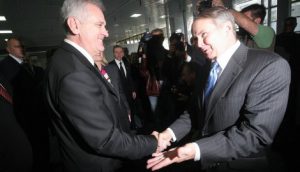 According to an article published online by the Belgrade based newspaper Blic, William Montgomery the outspoken former United States ambassador to Serbia, is in fact a paid Serbian lobbyist:

“The SNS leader [and former leader of the ultranationalist Serbian Radical Party] Tomislav Nikolic engaged last year former USA ambassador to Serbia William Montgomery to help him improve his party’s image in the USA and the EU, but also help him win power in Serbia. The monthly advisory fee is EUR 7,500 monthly plus costs…” Full text of the article can be found here.

In the past few years there had been intense speculation that Mr. Montgomery was an outspoken lobbyist who was working on behalf of Serbian ultranationalist parties and politicians to advance their political interests and aspirations by using the heft of his former position and the connections he had made throughout his career to write and speak out publicly on their behalf. These speculations and rumors have now been reported to be true. Mr. Montgomery’s main efforts seem to be directed at changing the United States foreign policy in a direction that would please the Serbian ultranationalist politicians, parties, and intellectuals. These are the same group of people that had brought Slobodan Milosevic to power in the late 1980s and had actively taken part in the wars of aggression perpetrated by Serb forces in Bosnia-Herzegovina, Croatia, and Kosovo. Mr. Montgomery is allegedly a well paid and effective mouthpiece for the same ultra-nationalist ideology and policies of expansion for a “Greater Serbia” that have in the recent past brought about genocide, ethnic cleansing, the creation of concentration and rape camps, and had ultimately resulted in the worst atrocities committed on European soil since the horrors of the Holocaust.

On June 4, 2009 Mr. Montgomery wrote an Op-Ed article published in the New York Times titled “The Balkan Mess Redux” where he argued that the United States should fundamentally change its longstanding foreign policy objectives in the Western Balkans by supporting Serbian ultranationalist political principles. He stated that the peoples of Bosnia-Herzegovina and Kosovo could never peacefully live together and that they would have to be forcefully separated from each other (practically paraphrasing what Radovan Karadzic had been telling the world as he was orchestrating the Bosnian Genocide). He also stated that Kosovo and Bosnia-Herzegovina should be territorially divided so that large parts of the countries would be annexed into a Greater Serbian state (articulately laying out Milosevic’s core political ideology). Finally, he stated that the key to achieving these Serbian ultranationalist and expansionist political objectives would be a fundamental shift in U.S. foreign policy so that it was aligned with the same policies that Milosevic, Karadzic, and Mladic had pursued in the 1990s and which today have effectively been inherited by their political successors Milorad Dodik, Tomislav Nikolic, and Vojislav Kostunica. The article so succinctly and articulately stated and so fully encompassed the main political policies and objectives of the Serbian ultranationalist far-right parties from the time Slobodan Milosevic came to power to the present time that it could justifiably be called the Greater Serbian ultranationalist manifesto of our time.

On June 9, 2009 the Congress of North American Bosniaks responded to Mr. Montgomery’s Op-Ed article (http://www.bosniak.org/cnab-response-to-william-montgomery-in-new-york-times/) with a statement that rebuked Mr. Montgomery for his outspoken advocacy of political ideologies that are founded on ethnic and religious hatred and that if they were to once again be sanctioned by Serbian state institutions would invariably lead to more bloodshed in Bosnia-Herzegovina and neighboring countries – in effect leading to a new and very serious crisis in the Balkans. The fact that these incendiary statements were made by a former American diplomat with strong connections to the region raised serious concerns that the United States was shifting its long standing foreign policy in the region to favor policies espoused by radical ultranationalist Serbian politicians, parties, and political movements. Since then it has – fortunately for the people living in the region – been revealed that that Mr. Montgomery was not heralding a shift in official U.S. policy and was apparently making these statements on behalf of a radical, ultranationalist, and malignant strand of Serbian politics with personal motives in mind.

If the media reports are accurate, it would be unfortunate and regrettable that a former American diplomat has chosen to become a paid public supporter and mouthpiece for a menacing political ideology that has led to violence and genocide in the recent past and is still intrinsically genocidal and chauvinist in nature. Mr. Montgomery is reportedly being paid substantial sums of money to actively work against U.S interests by allying himself with Serbian political parties and movements that are at their core opposed to the policies and values of the United States of America.

Mr. Montgomery’s alleged associations with radical and ultranationalist political movements that have a proven track record of instigating and supporting violence and genocide against non-Serbs as well as the reports that he is handsomely paid by them to make his misleading and dangerous statements should raise concerns about the motives and intended consequences of his statements, comments, and actions. We call on the U.S. State Department, and EU representatives to critically question and be wary of Mr. Montgomery’s statements, actions, comments and accounts as they try to formulate new strategies to ensure the successful integration of the countries of former Yugoslavia into Euro-Atlantic structures and with it the long term peace, reconciliation, democratization, and economic prosperity– the very hopes, aspirations, and policy ideas that Mr. Montgomery is seemingly paid to speak out against.