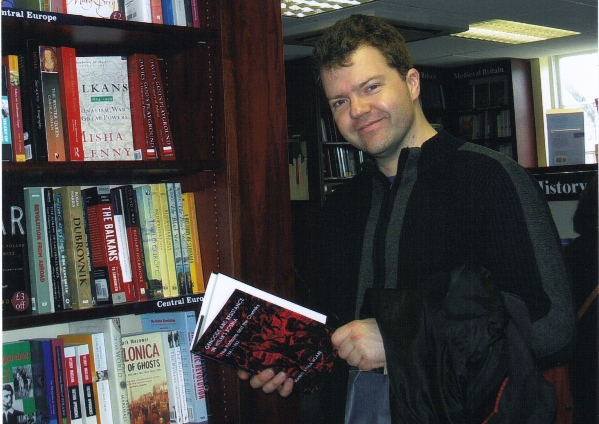 Office of the President
The University of British Columbia
6328 Memorial Road
Vancouver, BC Canada V6T 1Z2

I am writing to you to express my deep concern at the lecture by Srdja Trifkovic, hosted by the Serbian Students’ Association, scheduled to take place at UBC tomorrow (Thursday, 24 February). I am a firm believer in freedom of expression, even for those who hold offensive views. However, I believe that hate-speech directed against an ethnic, racial or religious minority goes beyond anything that can be permitted at a university, and constitutes a threat to the security and wellbeing of students and academic staff who belong to the minority in question.

Mr Trifkovic has equated Islam and Muslims with terrorism (‘With Islam, terrorism is not only an instrument, a tool, it is also the core of policy itself. Terrorist violence is not only divinely sanctioned, it is divinely ordained.’) He has equated Muslims with rapists (‘in Scandinavia you have literally a rape epidemic, perpetrated by Muslim immigrants against Swedish, Norwegian and Danish women.’) He has called for ‘an absolute moratorium on the immigration of Muslims into both Western Europe and North America, coupled with the denial of citizenship to all practicing Muslims, the denial of security clearances, and the policy of systematic deportation of all jihadists activists’. He has described Muslims as ‘the enemy’, of which he says ‘We know his core beliefs, his role models, his track-record, his mindset, his modus operandi, and his intentions. We also know his weaknesses, which are many, above all his inability to develop a prosperous economy or a functional, harmonious society, his inability to think rationally and therefore to develop science, and his utter lack of creativity in any field of human endeavor.’

This constitutes hate-speech; the incitement of hatred and violence against Muslims as a group. To appreciate the full extent of Trifkovic’s extremism and hatred of Muslims, I recommend that you read the whole of the texts in question, which can be found at the following links:

For your university to provide Mr Trifkovic with a platform from which to spout his hate propaganda against Muslims would infringe the rights of your Muslim students and staff members to freedom of religious belief and freedom from persecution; it would enable him to incite violence and discrimination against them, directly threatening their security and wellbeing. This is particularly so, since Mr Trifkovic apparently intends to speak on topics directly related to Islam and Muslims, including ‘Is a new crisis brewing in the Sanjak [a largely Muslim region of Serbia]’ and ‘The impact of Turkey’s growing involvement’.

I therefore recommend that UBC bar Mr Trifkovic from giving his lecture, and ensure that the Serbian Students’ Association is made aware of Canada’s hate-speech laws, to ensure that a speaker of this kind is not invited in future.