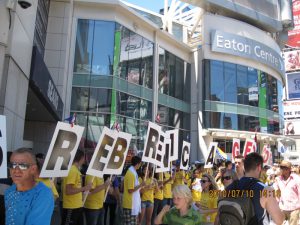 On July 9th, 2010, the second floor of the Gladstone hotel was host to the official start of a set of ceremonial activities organised by a dedicated group of volunteers.
Three separate rooms housed three very distinct but connected experiences for the approximately 200 reception-goers, featuring Roger LeMoyne’s exhibit “Srebrenica: The Absence”. This gripping photo series, which began in 1995, conveys the sense of loss, an unwavering need for justice and the importance of preserving history. In the main foyer on the second floor, a bright, eclectic, and mostly young crowd mingled as the Jusuf Dzilic (aka Genocide) video “Srebrenica” played on an iMac. Petition forms and informational pamphlets were available at the information desk, to gain support from the Canadian public on passing the genocide resolution and bill currently in front of Parliament. Owing perhaps to the event’s timing, a large number of street-traffic was welcomed by an always abundant and receptive host group. Windsor-West MP Brian Masse continued to show his support for the Bosniak community and this important issue by personally attending the event.

In the south-facing rooms, traditional Bosnian music, Sevdalinka, and traditional religious songs, Ilahija, were played as visitors viewed images that were both disturbing and impactful. In the north-facing room, pictures of the bereaved, the dead, and the still missing gave the impression of some end, but no closure, to the viewer. An equally heavy melody and visuals by Alma Ferovic played on a video screen, and this song combined with the images brought many visitors to tears.

Over three hundred people, all wearing a distinctive bright yellow tee with the words “Never forget / Srebrenica Genocide / July 11, 1995”, gathered in front of the Royal Ontario Museum at noon on Saturday, July 10, 2010. Comprised mostly of young Canadian Bosniaks, but with a healthy contingent of supporters from other communities, the group began a silent march through the streets of downtown Toronto. The lead group walked silently in a file of two, each member carrying a single letter that spelled out “SREBRENICA GENOCIDE” along the left, and flags of Canada and Bosnia on the right. The procession walked on the right-hand sides and north sides of the street so that the placards could be seen by all, informing onlookers of the cause. Continuously handing out informational pamphlets and flyers to a very receptive Toronto public, the group made several stops at major Toronto media outlets such as CTV, CP24, and CBC, as well as major landmarks such as Yonge and Dundas Square, and Nathan Phillips Square. Canadians, Canadian-Bosnians and Canadian-Bosniaks on this day showed the civility, pride, and solidarity of a nation that continues to struggle for justice against those perpetrators of genocide in Srebrenica, elsewhere in Bosnia, and the world.

The 2-hour program on the 15-year anniversary of the Srebrenica Genocide began at 7PM on July 11, 2010 at the Bosnian Islamic Association. The hall was decorated with the photos of Roger Lemoyne, various books on the Srebrenica genocide, related poetry, informative quotes and yellow lilies. Yellow lilies being a symbol of Bosnia and the Bosniak people. Near the entrance to the hall stood six large tables on top of which was listed the names of the 8, 372 men killed in Srebrenica 15 years ago. The tables were symbolically draped in green, as the tradition among Bosniaks is to drape the coffins of their deceased in green cloth.

An informative and heart-wrenching 30-minute documentary outlining the circumstances of the fall of Srebrenica and individual stories of the massacre was played to a crowd of 300 that included Parliamentarians Hon. Brian Masse, Hon. Boris Wrzesnewskyj, Hon. Rob Oliphant, as well as distinguished guests.

The Srebrenica Memorial Film was followed by a short video by Tarik Samarah as a preamble to the riveting account of a now 35-year old man who is an Omarska concentration camp survivor (he was held for 202 days). Fadil Kulasic, an experienced speaker, tailored his typically 3 hour talk, to 30 minutes, focusing on 6 of his most vivid and defining memories. Fadil’s stories left the audience speechless and tearful. He showed bravery and strength in sharing these difficult, heartfelt stories with the audience. A common thread amongst the six stories was one of strength and perseverance. Fadil mentioned that throughout his experiences he often heard other victims like himself proclaim “Ne daj se, Bosno!” (Don’t give up Bosna), and he shared this with the audience reiterating that the we should never give up on Bosna and we should never forget the atrocities that occurred there. The reason Fadil believes he is alive today is that he would always look his captors in the eyes and he wouldn’t turn his back to them when they asked him to, no matter what. He believed that if there was any ounce of humanity in his captors, that they wouldn’t be able to hurt him if he looked them in the eye. The final message he gave the audience was that he wanted to remind us to never turn our backs to Srebrenica.

The final half of the program was filled by a rousing set of speeches from the MPs. Hon. Brian Masse’s passionate show of support and the message that Canada must recognize the genocide for the good of its citizens and for the sake of its reputation in the world was received with a standing ovation. Hon. Boris Wrzesnewsky talked about loss and memory and Hon. Rob Oliphant discussed the need for truth and reconciliation and both these messages were warmly received with standing ovations as well. The Bosniak community and their supporters were honoured to have these three distinguished MPs attend the event and show their support for having Srebrenica recognized as a genocide in Canada and having July 11th recognized as Srebrenica Remembrance Day. The evening closed with a moving commemoration ceremony that involved the laying down of yellow lilies, by each attendee, on the tables containing the names of 8, 372 men that were killed. A traditional ilahija, “Don’t Grieve with Tears”, sung by Mensura Bajraktarevic played throughout the hall.