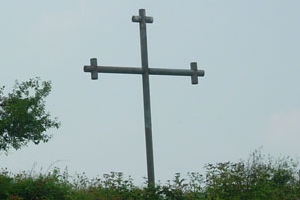 In 1999 the Serbian Orthodox Church (SPC) illegally misappropriated Bosniak-owned (Bosnian Muslim) land for the purpose of constructing a church in Potocari, a village that was almost entirely (93 percent) Bosniak before the war.

The following year, the Office of the High Representative for Bosnia and Herzegovina (OHR) ordered the suspension of the work, citing that the SPC does not have the authority to take over land for the construction of religious buildings. But local Serbs, many of whom unfortunately participated in the massacres of Bosniak people of Srebrenica during the period from April 1992 to July 1995, do not have any regard for legal authority.

Several days ago, or to be more precise just two months before the planned commemoration of the 15th anniversary of the July 1995 Srebrenica Genocide, local Serbs erected a large wooden cross in the Bosniak settlement of Budak, on a ridge overlooking the village of Potocari where the memorial to the Genocide victims is located. The Serbs are planning to build a Serb Orthodox church at the site, which is located in a Bosniak area, in the vicinity of the Budak mass grave.

This latest provocation, however, is nothing new. Local Serbs also deliberately picked July 12 — the day following the annual commemoration of the victims of the Srebrenica Genocide – to stage their own annual ceremonies commemorating Serb war casualties in the area. Most of the latter were Serb soldiers who were killed while pillaging and torching Bosniak villages and murdering Bosniak civilians around Srebrenica during the period from 1992 to 1995.

The attempts to misuse Christian religious symbols as “territorial markers” of xenophobic Serb nationalist domination in Srebrenica began in the immediate aftermath of the 1995 Srebrenica Genocide. Following the conquest of Srebrenica by the Bosnian Serb army and the wholesale slaughter of its Bosniak residents, a large Serb Orthodox cross was erected atop the old Ottoman fortress (Stari grad), on the top of a high hill that overlooks the center of Srebrenica.

This was followed by a project to build a Serb Orthodox church on stolen land in Potocari, near Srebrenica, at a site just a couple of hundred meters from the Memorial Centre and cemetery, the final resting place of thousands of Bosniaks slaughtered in the 1995 Srebrenica Genocide. And now the latest Serbian cross has been erected in the settlement of Budak, on a ridge overlooking Potocari, to mark the future site of another new Serb Orthodox church that they are planning to build there.

Serbs in the area apparently still cannot come to grips with the reality of what happened in Srebrenica during the war. Their continual attempts to create an imaginary history of Serb suffering in this region (see ICTY press release for 06.07.2005 and 14.03.2007) have been repeatedly discredited in the courts. When all is said and done, the fact is that it was Bosnian Serb forces that committed the overwhelming majority of crimes in the Srebrenica region during the period from April 1992 to July 1995. Already in the spring and summer of 1992, three years before the Srebrenica Genocide, Serb forces torched and ‘ethnically cleansed’ more than two hundred Bosniak settlements in the Srebrenica area; burned to death hundreds of Bosniak women, children and the elderly; humiliated and raped thousands of Bosniak women and girls; and slaughtered or expelled all Bosniak residents from the adjacent Bosniak-majority municipalities of Bratunac, Vlasenica, Rogatica, and Visegrad, destroying hundreds of Bosniak communities.

Serbian denials of the Srebrenica genocide prompted Holocaust survivor and President of the U.N. Criminal Tribunal for the former Yugoslavia, Judge Theodor Meron, to pay a visit to the Srebrenica Genocide memorial on 23 June 2004. Judge Meron delivered a moving speech quoting part of the Tribunal’s judgment in the Krstic case and warning everyone, including Serbs, that Genocide is the right name for the crimes committed in Srebrenica:

“By seeking to eliminate a part of the Bosnian Muslims, the Bosnian Serb forces committed genocide. They targeted for extinction the forty thousand Bosnian Muslims living in Srebrenica, a group which was emblematic of the Bosnian Muslims in general. They stripped all the male Muslim prisoners, military and civilian, elderly and young, of their personal belongings and identification, and deliberately and methodically killed them solely on the basis of their identity. The Bosnian Serb forces were aware, when they embarked on this genocidal venture, that the harm they caused would continue to plague the Bosnian Muslims. The Appeals Chamber states unequivocally that the law condemns, in appropriate terms, the deep and lasting injury inflicted, and calls the massacre at Srebrenica by its proper name: genocide. Those responsible will bear this stigma, and it will serve as a warning to those who may in future contemplate the commission of such a heinous act.”

The Chair of the Board of Directors of the Canadian Institute for the Research of Genocide, Prof. Emir Ramic, has condemned the installation of a cross at the site as “yet another act of provocation by war criminals against the victims of genocide.” He added, “This is a clear signal that the war of aggression against Bosnia-Herzegovina has not ended; on the contrary, it continues, using different means and methods. This is a time when Bosniaks need to be aware of and focused on what the war criminals are doing, and to speak out loudly and clearly in support of a culture of remembrance.”

Mr. Rusmin Topalovic, president of the Association of Survivors of the Srebrenica Genocide, an NGO based in Saint Louis, Missouri, stated, “The erection of the cross above Srebrenica is not a religious imperative but the latest in a series of provocations against Bosniaks who survived the Genocide. ” He added, “We are still looking for the bones of our loved ones in order to be able to give them a dignified burial.” Mr. Topalovic warned that every 12 July, Serbian Chetniks [former World War II Nazi collaborators] assemble in Srebrenica to insult the victims. “The Chetniks who committed the Genocide, in front of the eyes of the whole world, march through Srebrenica. I ask myself, how long must we continue to tolerate this?”

Mrs. Hajra Catic, president of NGO “Women of Srebrenica”, told me that Serbs “always come up with something to provoke every year, so it’s no wonder they used a cross this time.” She added that, “as far as we are informed, the cross was erected on a Serb-owned plot of land, belonging to a local war crimes suspect who otherwise works as a police officer. His documents were confiscated from him, but since there was not enough evidence to prosecute him, he was allowed to continue working. We have reacted by meeting with the U.S. ambassador [Charles English] whom we informed about this cross, and if that cross was indeed erected on Serb-owned land, there is nothing we will be able to do.”

Hajra went on to explain that they had somewhat successfully managed to stop the construction of another Serbian Orthodox church, just steps away from the Srebrenica Genocide memorial.

“But, there is a church for which construction had started, on a Bosniak-owned plot of land in Potocari, just a small distance away from the Memorial Centre. That land is Muslim land, it belongs to my daughter-in-law, in fact her father is the owner, and the case is going to be decided in the court. The construction of that church was never finished and has long been discontinued and only the remains of the church foundations are standing there. The former mayor of Srebrenica approved the removal of the church foundations, but nobody has done it so far, so we expressed our concerns to the US ambassador and he assured us he would do anything in his power to look into this matter.”