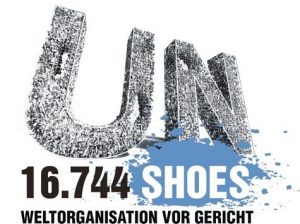 A German non-governmental organisation has launched a campaign to erect a monument highlighting the ‘shameful’ role of the United Nations during the 1992-95 war in Bosnia, in particular during the July 1995 events in Srebrenica, reported BIRN. The Centre for Political Beauty wants to build a monument made up of the two gigantic letters ‘UN’ on the hill above Potocari, where most of the victims were killed. Calling it the Pillar of Shame, the organisation says such the monument would put a spotlight on the “arrogance of the United Nations” in Bosnia.

“Our goal is to remind people of what happened in Bosnia on that day,” Merima Spahic, the centre’s press officer told Balkan Insight.

The organisation will also send a letter to the international football association FIFA asking for the 8,372 places to be left empty at the stadium on 11 July where the last game of the 2010 World Championship will be played, or to postpone the game in remembrance to the victims of Srebrenica.

On 11 July 1995, the Bosnian Serb Army, under the command of General Ratko Mladic, occupied Srebrenica. In the next seven days, more than 8,000 people, mostly man and boys, were killed, and thousands of civilians expelled from the city.

Srebrenica was proclaimed a UN safe zone in 1993. In 1995, a UN Dutch battalion was based in Potocari, near Srebrenica. Civilians who were running from the city, tried to find refugee in the UN base.

In 2004 a memorial centre was opened in Potocari. Every year on 11 July a memorial is held and the remains of those who were killed and found in mass graves are buried at Potocari. The former UN base has been made into a museum to commemorate the genocide.

Spahic said the project should “serve as a metaphor for the immense betrayal of the UN in Bosnia and Herzegovina”.

She said the construction of the monument should start in May 2011. Before that, the centre says it will lead a campaign to promote its idea and raise awareness about genocide committed in Bosnia and the UN’s responsibility in letting these events happen.

As part of the campaign the centre will contact leading politicians around the world to ask them to donate their shoes to help build the memorial. The monument would be made out of 16,744 shoes (representing the 8,372 victims) positioned inside the two letters ‘UN’, protected by plexiglas. The letters would measure eight metres in height and be coloured in ‘shimmering white’, the centre says.

The two letters would be pierced by three “monumental bullet holes” with real shoes found in mass graves embedded in them.

The Mothers of Srebrenica, the association who represents the relatives of the victims, who also supports the idea, would then choose the names of the western politicians and army generals whose names would be mentioned and ‘shamed’ by the monument.

The idea was initiated by the centre and another NGO, the Society for Threatened Peoples, three years ago. Part of the project also aims to organise discussions around the world about the UN’s responsibility in Bosnia.

This Pillar of Shame should meet three criteria, the centre concludes: reflect the UN responsibility; “name, shame and thus point” to the individuals who are guilty of “inactivity, complicity in genocide”; and symbolize “broken promises of protection”.