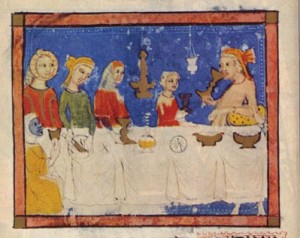 The Sarajevo Haggadah, a Bosnian national treasure, has survived the Spanish Inquisition, the Holocaust, the Siege of Sarajevo, and the ravages of time. Muslim and Christian Sarajevans rescued and safeguarded the Haggadah during both the Nazi invasion of 1941 and the Siege of Sarajevo in the early 1990’s

– remarkable acts of solidarity and bravery on behalf of their city and Jewish neighbors. The Haggadah was restored and publicly displayed for the first time in 2002 at the National Museum in Sarajevo.

Join us for an exploration of the history and significance of this treasured 14th century illuminated manuscript.

Read more about the Haggadah at www.haggadah.ba