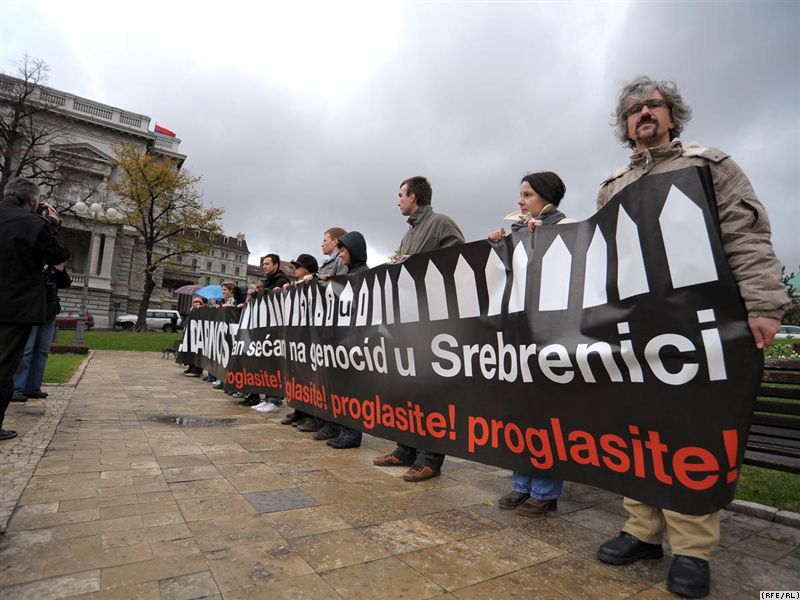 On March 31st the Serbian Parliament failed to seize the historic opportunity of offering an honest apology to the victims of the Srebrenica Genocide – the single worst act of violence against an innocent and defenseless civilian population seen in Europe since the Holocaust.

By refusing to call the war crime committed in Srebrenica genocide as the International Court of Justice (ICJ), UN, US, and EU have done, a key opportunity for Serbia to come to terms with its inglorious recent past, turn the page, and forge a better future for the people living in the countries that made up the Former Yugoslavia was missed.

For fifteen long years the Bosnian people have waited for the Serbian government to formally apologize to them for the full political, military, and economic support that the Serbian government then headed by the nationalist strongman Slobodan Milosevic had provided to the Bosnian Serb military that committed the genocide in Srebrenica. Their hopes were raised in 2004 when the ostensibly moderate and EU oriented Boris Tadic was elected to the Serbian presidency and made a historic visit to the Potocari cemetery (final resting place for the victims of the Srebrenica massacre) where he apologized for the crime that was carried out in the name of the Serbian people. He was most likely referring to the notorious statement made by general Ratko Mladic, the leader of the Bosnian Serb military, that the genocide he was to commit in Srebrenica was a gift to the Serbian people. Tadic’s visit to the Potocari cemetery and the statements he made there set the stage for a formal apology by the Serbian government six years later.

Any hopes that the long wait would pay off were dashed when the Serbian parliament barely approved a resolution that apologized for the “crime” and “tragedy” that occurred in Srebrenica. Given that the International Criminal Tribunal for the Former Yugoslavia (ICTY) had in 2004 proclaimed the crime that was committed in Srebrenica to have been a clear case of genocide, that in 2007 the International Court of Justice (ICJ) had confirmed that genocide took place, that in 2007 the ICTY stated that Serbia had violated it’s obligation to prevent the genocide from taking place, and that in 2009 the European Parliament passed a resolution that called for the commemoration of the “Srebrenica-Potocari act of genocide” it was expected that any formal apology would clearly state that genocide took place. The resolution passed by the Serbian parliament fails to live up to that reasonable expectation and that jarring omission fatally weakens the resolution. It comes off as being little more then an attempt by the Serbian government to win favor with the EU without having to acknowledge the genocide that took place.

More troubling is that by refusing to call the crime by its proper name the Serbian government has passed a resolution that appeases those members of Serbian society who actively deny that genocide took place and continue to view the bloodshed that took place in the 90s through Milosevic’s rose-colloredcolored ultranationalist glasses. We have to remember that genocides are not committed in a vacuum but instead require a hateful ideology and accompanying policies which explicitly seek to exterminate a people from their territory. As long as Milosevic’s fascist policies that led tohe the genocide are kept on the back-burner of Serbian politics and are not earnestly challenged by Serbia’s political elite the long term stability of Serbia and its neighbors can not be ensured. The fact that the current leading political parties were either not willing or able to stand up for the truth and to call the crime that was committed in Srebrenica by its proper name sends a worrying signal that Serbian society is not yet willing to accept historical reality and that denial and revisionism of the war crimes and genocide that were committed in the name of the Serbian people are potent forces shaping Serbia’s society and politics.

It is deeply regrettable that the current Serbian government has not used this historical opportunity to come to terms with the recent past and to create a strong foundation for a peaceful future. By refusing to publicly acknowledge that genocide took place in Bosnia-Herzegovina and continuing to allow it’s main architect general Ratko Mladic to continue to reside in Serbia in violation of Serbia’s international legal and moral obligations Serbia has issued an insincere apology which can not and will not lead to long term peace and reconciliation – a sincere apology will be required for that to take place.