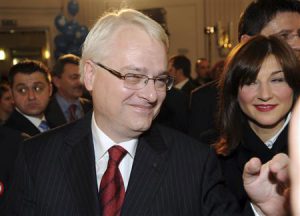 SARAJEVO, Bosnia-Herzegovina — Croatia’s president apologized Wednesday for his country’s role in the Bosnian war, the clearest message of reconciliation to date from any leader of the three nationalities involved in Europe’s bloodiest conflict since World War II.

Bosnia’s president in turn praised relations with Croatia, remarks that starkly contrasted with his harsh criticism of Serbia the day before.

As Yugoslavia was falling apart in the 1990s, the leaders of its republics of Serbia and Croatia planned to carve up Bosnia — positioned between them — and annex half each. Bosnia’s Serbs, Croats and Bosniaks — Bosnian Muslims — also clashed in hostilities that also drew in the neighboring republics and took 100,000 Bosnian lives.

“I’m deeply sorry that the Republic of Croatia … has contributed to the suffering of people and divisions which still burden us today,” President Ivo Josipovic told Bosnia’s parliament, describing the politics of the 1990s in the countries involved in the war as planting lasting “seeds of evil” in Bosnia.

At present, a Bosniak-Croat federation makes up half of Bosnia and a Serb republic the other half. Because of the three perceived different national interests, Bosnia barely functions on a federal level, primarily because Bosnian Serbs do not want to transfer any of the powers of their ministate to the central government. This is a key obstacle standing in the way of Bosnia’s EU membership.

On his first visit since his election in January, Josipovic urged Bosnian Croats to accept Bosnia as their country — a plea prompted by the continued push by some Bosnian Croats for their own Bosnian ministate.
Croatia itself is a member of NATO and hopes to join the EU very soon.

“But the Croatian accession project will not be complete until our neighbors are included, particularly Bosnia-Herzegovina, Serbia and Montenegro,” Josipovic said. “We have to find strength to overcome our doubts and fears and get out of this vicious circle.”

Bosnian President Haris Silajdzic said that “Our relations with the Republic of Croatia have been good and friendly for some time, regardless of some outstanding issues.”

A day earlier, Silajdzic accused his Serbian counterpart of paying only lip service to reconciliation as he criticized Serbia’s demand for the extradition of former Bosnian Vice President Ejup Ganic.

Ganic was arrested in London last month on Serbia’s request. Serbia accuses him of ordering an attack on retreating Serb soldiers in what was then the Yugoslav army in the Bosnian capital, Sarajevo, at the start of the Bosnian war. The allegations were investigated by the U.N. War Crimes Tribunal at The Hague, but legal officials there decided there was insufficient evidence to prosecute.