This post was co-authored by Mary Welstead, a visiting professor at the University of Buckingham. It was originally published by GlobalPost. 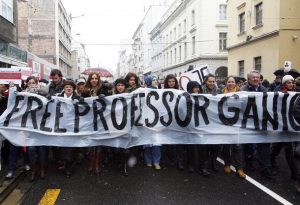 Monday, March 1, 2010, on the eve of his 64th birthday, Professor Ejup Ganic was arrested. A United States-educated academic and former member of the Presidency of Bosnia and Herzogovina, Ganic was en route to his home in Sarajevo via Heathrow Airport. Taken into custody by officers from Scotland Yard’s Extradition Unit and brought before a magistrate, he was immediately incarcerated in a London prison. For three days, he was denied access to consular services, his lawyers and his family. The United Kingdom government’s excuse was administrative error.

Over these several weeks, the highly regarded system of British justice has been seriously questioned. Though Ganic has now been released on bail, the conditions are stringent: He must report daily to the police, stay at one address in London, and he is not allowed to travel.

This stunning state of affairs came about because the Republic of Serbia, which waged a bloody war on Bosnia from 1992 to 1995 and placed Sarajevo under the most appalling siege of modern times, made a preliminary request to the U.K. for Ganic’s extradition. It alleged that he had committed war crimes in 1992 during the Serbian-led aggression against Bosnia. These allegations have already been investigated — and dismissed — by the International Criminal Tribunal for the former Yugoslavia in The Hague.

Serbian authorities have one month to produce evidence to back up their request for extradition. At that point, a date will be arranged for a judge to decide the future of Ganic. His barrister, or Queen’s Counsel, Clare Montgomery, has described the attempt to prosecute him as a mockery of justice. His solicitor, Stephen Gentle, maintains that Serbia’s request is flawed and misconceived.

Bosnian authorities have protested strongly to the British ambassador in Sarajevo about Ganic’s treatment. They maintain rightly that this action is in contravention of international treaties on consular and diplomatic relations. The shadow foreign secretary, William Hague, has asked Foreign Secretary David Miliband to investigate. He is anxious that there is a real risk of repercussions between the U.K. and Bosnia, as well as other Balkan nations. In fact, thousands of Bosnians have gathered outside the British embassy in Sarajevo to register their concern and show their support for Ganic.

Why did they arrest Ganic? The allegations are a thin attempt to pretend that the conduct of Bosnian leaders to defend their country during the war was no different from the barbarism perpetrated by Serb political and military forces. Human rights groups have consistently found that the huge majority of atrocities committed during the war were at the hands of the Serbs. It’s not a blanket indictment of all Serbs to insist that those who allegedly led the genocide be put to trial, nor is it “even-handed” to accuse leaders on all sides.

The world will never forget news reports as Serbia surrounded Sarajevo, former host of the Winter Olympics, and from the hills rained down rockets and bullets on citizens. Casualties of the war were massive; 150,000 were killed in a country with a population of 4 million; hillsides today are filled with white tombstones. Still, though 60 percent of the housing was destroyed, the spirit of many Bosnians stayed strong.

Now Serbia is anxious to draw public attention away from the trial of one of its former leaders, Radovan Karadzic, which resumed in The Hague on the day Ganic was arrested. According to the New York Times, the Bosnian Serb is “widely regarded by diplomats as the chief architect of ethnic cleansing … crimes that were Europe’s worst atrocities since World War II.”

In his speech to the tribunal, Karadzic maintained, on the one hand, that the killing of thousands of Muslims was “just and holy,” and on the other, that the killing of 8,000 unarmed Muslim men and boys by Serbs at Srebrenica did not take place. The mass graves, he suggested, were filled with bones brought from elsewhere — shades of Holocaust denial yet again.

This whole affair is embarrassing for the British government. The U.K. is regarded as a soft touch for the execution of many extradition requests issued for spurious reasons. The government now claims to be unable to intervene in Ganic’s incarceration; the strictly observed separation of powers means that the matter is now in the hands of the courts. It leaves open the possibility that Bosnia will carry out its threat to rescue Ganic by issuing a request that the U.K. hand him over to authorities there.

Bosnia argues that there is an agreement between Serbia and Bosnia for those alleged to have perpetrated war crimes to be tried in their home jurisdiction if the alleged crime was committed there. Such an action would lead to an unprecedented double extradition contest between Bosnia and Serbia, and a long legal battle in the U.K. courts.
Ganic is a true patriot. He returned to his country from America to enter political life. As deputy to Bosnian President Alija Izetbegovic, he chose to remain with his people during the war, enduring pain, cold and famine alongside them when he had every opportunity to enjoy a comfortable life elsewhere. Since 1995, he has sought — first, as a politician, then as an educator — to bring political stability and economic security back to his country.

Convinced that education is the future, in 2004, after an introduction to the University of Buckingham by Lady Thatcher, he entered into a joint venture and opened a new multi-ethnic, English-language university, the Sarajevo School of Science and Technology. The university offers both Bosnian and U.K. degrees. It’s ironic that Ganic was returning from Buckingham on the day of his arrest, having watched his second cohort of students enjoy their graduation ceremony.

Serbia has succeeded in creating maximum chaos, and expense, for both Ganic and the U.K. It’s a moral shame to abuse these extradition proceedings as a means of satisfying one state’s political insecurity, rousing the inter-ethnic conflict Ganic has struggled so courageously to counteract.