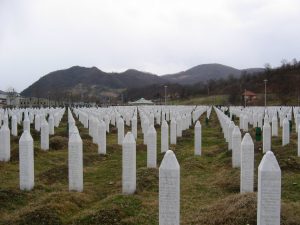 Serbia is mulling over a resolution expressing remorse for the massacre in the Bosnian town of Srebrenica. This time, EU accession aspirations may prove a big enough incentive to make it happen.

The Serbian Parliament is expected to discuss and possibly even pass a resolution on the Srebrenica massacre in the coming weeks, in a move that is causing mixed feelings among the opposition and a dispute among members of the ruling coalition.

But more interestingly, and in the true Balkan fashion, it is not remorse over what happened in Srebrenica that Serbia is willing put its condemnation down on official paper, rather it is a matter of pleasing the international community as Belgrade seeks European integration.

In early January, Serbian President Boris Tadic announced that the parliament would prepare and adopt a resolution condemning the July 1995 massacre of some 8,000 Bosniak men in the eastern Bosnian town of Srebrenica and adopt a resolution condemning the incident. Immediately, the announcement was met with criticism by both opposition forces and members of the ruling coalition, who vowed to present a counter resolution.

While most members of parliament agreed that a resolution should be adopted, many object to singling out Srebrenica, noting that crimes were committed elsewhere in the region during the Yugoslav wars. As such, it is possible that the Serbian Parliament will debate two separate draft resolutions in an attempt to satisfy all parties.

The original resolution will specifically condemn crimes committed against Bosniaks in Srebrenica, while the parallel resolution condemns all war crimes on the territory of the former Yugoslavia – including against Serb victims in Croatia, Bosnia and Kosovo.

Though theoretically, this should be a sufficient compromise, it is not still safe to predict that the resolutions will pass without further compromises.

Serbian media predicts that Tadic’s initiative could secure the support of 120 parliamentarians from the ruling coalition and the opposition Liberal Democratic Party (LDP). However, this is not enough for the resolution to pass in the 250-seat parliament.

When is a spade a spade?

Still another issue could deepen the dispute and prolong the debate: How exactly should Serbia refer to what happened at Srebrenica? Though some agree that the incident should be labeled ‘genocide,’ the majority would rather call it a ‘severe crime.’

“The crimes committed against Serbs in the recent wars are tragedies, but the Srebrenica massacre is [also] a tragedy, and Serbia’s shame. We have to call it what it is: genocide,” Nenad Canak, leader of the League of Vojvodina Social Democrats (LSV), Tadic’s coalition partner, told ISN Security Watch.

Canak, whose party initiated the previous failed attempts to pass the Srebrenica resolution, said that it was important, for both moral and political reasons, that the resolution be approved by parliament, since it would distance Serbia from crimes and be a major contribution to reconciliation in the region.

“Serbia as the society, which for years neglected the crimes committed in its name, has to show support for such a resolution. I don’t know why we are afraid in Serbia to call the crime in Srebrenica its proper name, genocide,” Canak said, stressing that his party would not lend support to the alternative resolution in Parliament if in the final draft the term ‘genocide’ was left out.

The League of Vojvodina Social Democrats and the Liberal Democratic Party are unique among Serbia’s political parites in that when the speak publicly about the Srebrenica resolution, they discuss moral obligation above all else, due to Serbia’s involvement in the war in Bosnia and Herzegovina.

All others who would support the resolution, including Tadic, stress the necessity of its adoption in terms of easing the country’s EU accession bid, and in terms of Belgrade’s legal obligations to the Hague-based International Criminal Tribunal of the former Yugoslavia (ICTY) and the International Court of Justice (ICJ).

In February 2007, the ICJ cleared Serbia of responsibility for the genocide of Bosniaks and Croats, but said that Serbia had failed to use its influence with Bosnian Serbs to prevent the genocide at Srebrenica, and failed to comply with its international obligation to punish those responsible.

Tadic said that only by recognizing the suffering of others could Belgrade gain credibility in the international community, stressing that adoption of these resolutions would be beneficial to the people and the state of Serbia.

Sonja Biserko, the president of Serbia’s Helsinki Committee for Human Rights, told ISN Security Watch that the political elite’s failure to face up to Serbia’s role in the massacre has backfired, leading much of the world to assign collective guilt for Srebrenica to all Serbs. According to her, the passing the original resolution is the only way to make a break with Serbia’s wartime heritage.

“By doing so, we would confirm that the Republic of Serbia is sincere in its attempts to build a society different from the one led by [former Serb leader Slobodan] Milosevic, to condemn crimes and show respect for the victims,” Biserko said.

The resolution was also on the Serbian political agenda in 2005 but for the same reasons – the sticking point of singling out Srebrenica – it was sidelined.

This time around, however, Serbia may have a stronger incentive – EU accession.

Following the EU’s move last month to ease visa rules for Serbian citizens traveling to EU countries, authorities in Belgrade began to step up measures to fulfill the requirements for joining the bloc, hopefully by 2014.

For long, Belgrade’s European ambitions have been hampered over the failure to turn over major war crimes fugitives, particularly Bosnian Serb wartime General Ratko Mladic, indicted over Srebrenica and believed to be hiding out in Serbia.

But in early December 2009, chief UN prosecutor Serge Brammertz said Serbia had improved cooperation with the ICTY and was making satisfactory efforts to capture the fugitives. The Brammertz report led to the unfreezing of Belgrade’s interim trade pact with the EU.

Still, the Stabilization and Association Agreement (SAA) – the first step toward EU membership for western Balkan nations – remains blocked, as some member states, particularly the Netherlands, insist that Mladic first be captured.

The EU Council of Ministers is unlikely to consider Serbia’s membership application before June if the fugitives remain at large. Dutch and Belgian officials insist that the bloc wait for Brammertz’s next assessment before putting Serbia’s bid on the Council agenda.

Should Mladic be apprehended, the agreement would be immediately unblocked. And indeed, few experts would be shocked to learn of his arrest in a Belgrade suburb after over a decade on the run.

Indeed, if the Srebrenica resolution passes in parliament, it may prove a strong indication that political will to arrest Mladic is not far behind.

And certainly, Serbia has been more cooperative in terms of Srebrenica than its neighbor, Bosnia and Herzegovina, whose Bosnian Serb leaders have shown no effort at discussing the issue at an institutional level.

Should Serbia end up adopting the Srebrenica resolution, Bosnia and Herzegovina – where the massacre took place – would be the only country in the region not to have adopted such a resolution.

Bosnia itself failed to pass the resolution, though this was not unexpected, as the Bosnian Serbs in the government rejected the idea, saying that it failed to take into account Bosnian Serb victims of the war.

Bosnian Serb officials refuse to adopt a resolution on this single incident, saying any resolution should take into account all war crimes committed against Serbs on the territory from World War II on. Initially, Bosniak politicians agreed to such an arrangement, but insisted on highlighting the Srebrenica massacre. But this, too, is unacceptable to Bosnian Serbs, since it would lend credence to the claim that Republika Srpska (Bosnia’s Serb-dominated entity) was created on the foundations of genocide. As such, we should not expect a Srebrenica resolution to be on the Bosnian agenda for some time, as it would further inflame high ethnic animosity.