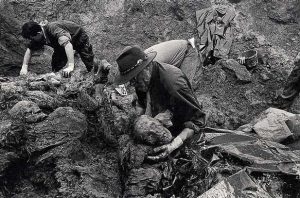 The Court of Bosnia-Herzegovina has confirmed indictment against Duško Jević, Mendeljev Đurić and Goran Marković for genocide. The three Serbs are accused of committing genocide against Bosniaks in Srebrenica.

The court has announced that the indictment states that the accused planned, ordered, encouraged and participated in the joint criminal act.

“Between July 10 and 19, 1995, the accused were allegedly causing serious injuries and mental harm to a group of Bosniaks, killing men and forcing women, children and elderly out of the UN safe area of Srebrenica in order to completely eradicate national, ethnic and religious group of Bosniaks,” the indictment reads.

The State Investigation and Protection Agency (SIPA), acting on orders from the Bosnian Prosecutor’s Office, arrested the three former police officers on October 28, 2009.

Ilić was a member of the Jahorina Police Training Center Unit that was in Srebrenica in July 1995, while Jević and Đurić were both witnesses before the Hague Tribunal in the Srebrenica crimes cases.