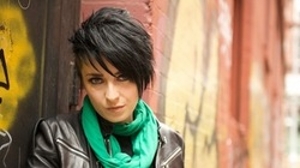 Naida Zukic, a Borough of Manhattan Community College (BMCC) assistant professor in the Department of Speech, Communications and Theater Arts, traveled to London, where her digital performance piece, “Weight of Meaninglessness,” was selected for screening at the ACT ART Festival.

The digital performance commemorates the Srebrenica victims, but Zukic is quick to note that its purpose “is to highlight the massacre not as a demonstration of powerlessness, but as a condition for possibility and agency.”

“For years, Muslims, Catholics, Jews and Serbs had lived in harmony in my town,” she recalls. “Then our world exploded.” Zukic and her family, who lived in Prijedor in northwest Bosnia, fled the country in 1995 and ultimately settled in the U.S.—but not before the Srebrenica massacre took the lives of 8,000 Muslim men and boys. It remains the most horrific instance of genocide in Europe since the Second World War.

Communicating across lines
Zukic’s chief interest, she says, has been “in exploring questions of power and agency, and how oppressed groups have historically negotiated those spaces and subverted power.”

“Weight of Meaninglessness,” a five-minute film that transcends language, “is borne out of my frustration with the medium of language as a means of expression,” Zukic says. “Over the years I’ve written essays and articles about human rights abuses and violations that have taken place throughout the world, and especially in Bosnia, but could never overcome the limitations of language. So I turned to the medium of digital performance as an alternative means of expressing things I couldn’t necessarily convey verbally.”

Reawakened memories
While memories of the Bosnian conflict have flared anew in recent years with the trials of Slobodan Milosevic and Radovan Karadzic, “few Americans are aware of the Srebrenica genocide,” Zukic says. “But it is never possible to escape the reality of war, suffering and human rights violations, as we see today in Iraq and Afghanistan.” Some survivors of mass trauma “externalize the experience by trying to forget, or by living in a perpetually wounded state,” she says. “Others must continually relive the experience in order to transcend and be empowered by it—by teaching or writing about it, or otherwise helping to create awareness of human suffering and humans rights violations. In that sense, the need both to forget and relive the trauma is paradoxical.”

In Zukic’s case, an aesthetic, rather than language-based approach has helped her work through the trauma she lived through as a young girl. “As a Bosnian refugee, the last thing I want to be seen as is a victim,” she says. “But the fact is that people who have survived traumatic events are traditionally seen in this way. ‘Weight of Meaninglessness’ is my response to that point of view.”

Naida Zukic on her digital performance — “The Weight of Meaninglessness”
http://www1.bmcc.cuny.edu/video/zukic_video.html

BMCC/ The City University of New York. is a leader among community colleges in the New York region and nationwide by continuing to develop degree- and non-degree programs meeting the educational and workforce training needs of New Yorkers striving to change careers or upgrade their current employment in these challenging economic times—22,000 individuals earning associate degrees in more than 26 fields, and 10,000 continuing education students seeking to upgrade their work skills—from 155 countries.