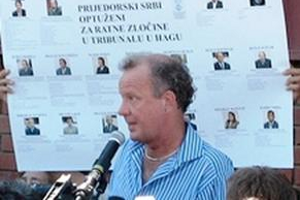 Noam Chomsky has been invited to give the annual Amnesty International Lecture in Belfast. This is second time in four years that Chomsky has been invited to give an Amnesty International Lecture (following Dublin in 2006). To celebrate Chomsky’s forthcoming Lecture appearance Amnesty gives him a respectful and uncritical platform for his views over three pages of the latest Amnesty (UK) Magazine.

Amnesty appears oblivious to the controversies that surround some of Chomsky’s views on human rights, and in particular the support that he has offered and continues to offer to polemicists who deny the substance, scope and authorship of the worst atrocities perpetrated during the 1992-1995 Bosnian war.

In recent years Chomsky has caused particular controversy through his support for the author Diana Johnstone, known for her “revisionist” views on Bosnia concerning the Prijedor concentration camps, the Srebrenica genocide and the existence of the Bosnian rape camps. Chomsky salutes her “outstanding” scholarship and defends her “serious, honest work”.

He represents his support for Johnstone as a defence of her right to freedom of speech while at the same time he denigrates the eyewitness testimony of The Guardian’s reporter Ed Vulliamy whose account of the reality of the Omarska and Trnopolje camps forced the horror of what was happening in Bosnia onto the attention of the rest of the world and in so doing saved the lives of many of the prisoners detained in them.

Without explanation Chomsky characterises Ed Vulliamy’s description of Omarska and Trnopolje as “probably” wrong while at the same time he endorses the claim by Thomas Deichmann and LM magazine that Vulliamy, Penny Marshall and Ian Williams gave a false account of the situation in the Prijedor camps as “probably” correct. Chomsky disregards the finding of a High Court libel action which – following the evidence of a doctor detained in one of the camps – confirmed that Vulliamy and his colleagues had told the truth.

When asked why Amnesty offers a platform to a man who challenges the reporting of human rights abuses that Amnesty itself substantiated and champions the seriousness and honesty of individuals who try to deny those abuses, Amnesty’s response was to observe that invitees are not representatives of Amnesty International nor expected to deliver an Amnesty International policy position within their lecture, but rather they have been invited as having something interesting and thought-provoking to say about human rights in the world today and Amnesty International does not necessarily endorse all their opinions.

When Ed Vulliamy was asked to comment on Amnesty’s invitation to Chomsky he wrote the open letter below. The language expresses his depth of feeling, not only on his own behalf but also on behalf of the friends forced to suffer “the ghastly, searing, devastating impact” of Chomsky’s denial of their experience.

To whom it may concern:

I have been contacted by a number of people regarding Amnesty International’s invitation to Professor Noam Chomsky to lecture in Northern Ireland.

The communications I have received regard Prof. Chomsky’s role in revisionism in the story of the concentration camps in northwestern Bosnia in 1992, which it was my accursed honour to discover.

As everyone interested knows, a campaign was mounted to try and de-bunk the story of these murderous camps as a fake – ergo, to deny and/or justify them – the dichotomy between these position still puzzles me.

The horror of what happened at Omarska and Trnopolje has been borne out by painful history, innumerable trials at the Hague, and – most importantly by far – searing testimony from the survivors and the bereaved. These were places of extermination, torture, killing, rape and, literally “concentration” prior to enforced deportation, of people purely on grounds of ethnicity.

Prof. Chomsky was not among those (“Novo” of Germany and “Living Marxism” in the UK) who first proposed the idea that these camps were a fake. He was not among those who tried unsuccessfully (they were beaten back in the High Court in London, by a libel case taken by ITN) to put up grotesque arguments about fences around the camps, which were rather like Fred Leuchter’s questioning whether the thermal capacity of bricks was enough to contain the heat needed to burn Jews at Auschwitz. But Professor Chomsky said many things, from his ivory tower at MIT, to spur them on and give them the credibility and energy they required to spread their poisonous perversion and denials of these sufferings. Chomsky comes with academic pretensions, doing it all from a distance, and giving the revisionists his blessing. And the revisionists have revelled in his endorsement.

In an interview with the Guardian, Professor Chomsky paid me the kind compliment of calling me a good journalist, but added that on this occasion (the camps) I had “got it wrong”. Got what wrong?!?! Got wrong what we saw that day, August 5th 1992 (I didn’t see him there)? Got wrong the hundreds of thousands of families left bereaved, deported and scattered asunder? Got wrong the hundreds of testimonies I have gathered on murderous brutality? Got wrong the thousands whom I meet when I return to the commemorations? If I am making all this up, what are all the human remains found in mass graves around the camps and so painstakingly re-assembled by the International Commission for Missing Persons?

These people pretend neutrality over Bosnia, but are actually apologists for the Milosevic/Karadzic/Mladic plan, only too pathetic to admit it. And the one thing they never consider from their armchairs is the ghastly, searing, devastating impact of their game on the survivors and the bereaved. The pain they cause is immeasurable. This, along with the historical record, is my main concern. It is one thing to survive the camps, to lose one’s family and friends – quite another to be told by a bunch of academics with a didactic agenda in support of the pogrom that those camps never existed. The LM/Novo/Chomsky argument that the story of the camps was somehow fake has been used in countless (unsuccessful) attempts to defend mass murderers in The Hague.

For decades I have lived under the impression that Amnesty International was opposed to everything these people stand for, and existed to defend exactly the kind of people who lost their lives, family and friends in the camps and at Srebrenica three years later, a massacre on which Chomsky has also cast doubt. I have clearly been deluded about Amnesty. For Amnesty International, of all people, to honour this man is to tear up whatever credibility they have estimably and admirably won over the decades, and to reduce all they say hitherto to didactic nonsense.

Why Amnesty wants to identify with and endorse this revisionist obscenity, I do not know. It is baffling and grotesque. By inviting Chomsky to give this lecture, Amnesty condemns itself to ridicule at best, hurtful malice at worst – Amnesty joins the revisionists in spitting on the graves of the dead. Which was not what the organisation was, as I understand, set up for. I have received a letter from an Amnesty official in Northern Ireland which reads rather like a letter from Tony Blair’s office after it has been caught out cosying up to British Aerospace or lying over the war in Iraq – it is a piece of corporate gobbledygook, distancing Amnesty from Chomsky’s views on Bosnia, or mealy-mouthedly conceding that they are disagreed with.

There is no concern at all with the victims, which is, I suppose, what one would expect from a bureaucrat. In any event, the letter goes nowhere towards addressing the revisionism, dispelling what will no doubt be a fawning, self-satisfied introduction in Belfast and rapturous applause for the man who gives such comfort to Messrs Karadzic and Mladic, and their death squads. How far would Amnesty go in inviting and honouring speakers whose views it does not necessarily share, in the miserable logic of this AI official in Belfast? A lecture by David Irving on Joseph Goebbels? Alistair Campbell on how Saddam really did have those WMD? The Chilean Secret Police or Colonel Oliver North on the communist threat in Latin America during the 70s and 80s? What about Karadzic himself on the “Jihadi” threat in Bosnia, and the succulence of 14-year-old girls kept in rape camps?

I think I am still a member of AI – if so, I resign. If not, thank God for that. And to think: I recently came close to taking a full time job as media director for AI. That was a close shave – what would I be writing now, in the press release: “Come and hear the great Professor Chomsky inform you all that the stories about the camps in Bosnia were a lie – that I was hallucinating that day, that the skeletons of the dead so meticulously re-assembled by the International Commission for Missing Persons are all plastic? That the dear friends I have in Bosnia, the USA, the UK and elsewhere who struggle to put back together lives that were broken by Omarska and Trnopolje are making it all up?

Some press release that would have been. Along with the owner of the site of the Omarska camp, the mighty Mittal Steel Corporation, Amnesty International would have crushed it pretty quick. How fitting that Chomsky and Mittal Steel find common cause. Yet how logical, and to me, obvious. After all, during the Bosnian war, it was the British Foreign Office, the CIA, the UN and great powers who, like the revisionists Chomsky champions, most eagerly opposed any attempt to stop the genocide that lasted, as it was encouraged by them and their allies in high politics to last, for three bloody years from 1992 until the Srebrenica massacre of 1995.

Yours, in disgust and despair,

On the heels of its announcement of the Chomsky lecture Amnesty published a report on the ongoing search for justice by the victims of rape in Bosnia. www.amnesty.org.uk/news_details.asp?NewsID=18431

Nicola Duckworth, Amnesty International’s Europe Programme Director, acknowledges that “During the war, thousands of women and girls were raped, often with extreme brutality. Many were held in prison camps, hotels and private houses where they were sexually exploited. Many women and girls were killed. To this day, survivors of these crimes have been denied access to justice. Those responsible for their suffering – members of military forces, the police or paramilitary groups – walk free. Some remain in positions of power or live in the same community as their victims.”

Alisa Muratcaus of the Association of Concentration Camp Torture Survivors, Canton Sarajevo, insists that people who deny that the mass rape of Bosnian women was a strategic element of the war are talking “nonsense”. Her Association, composed of Muslim, Croat, Serb, and Romani members, many of them victims in camps and prisons throughout Bosnia of atrocities including rape and other forms of sexual torture, works closely with the International Criminal Tribunal for the former Yugoslavia in The Hague which has established beyond doubt that rape was used in Bosnia as a weapon of war.