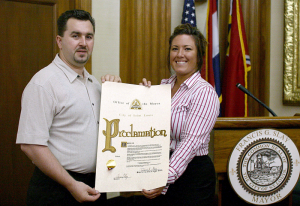 we recognize July 11, 2009 as a day of remembrance of the destruction of the City of Srebrenica and the brutal murder of thousands of innocent men, women and children; and

Whereas, the survivors, families and friends of those who were lost commemorate this solemn occasion every year in order to remind the world of the horrors of the war that devastated the people of Bosnia and Herzegovina; and

Whereas, the people of Bosnia have made St. Louis their new home and have been welcomed as our friends and neighbors; and

Whereas, we weep with our Bosnian friends and neighbors for the atrocities that occurred in the City of Srebrenica, but we celebrate the flourishing community of the Bosnian people here in St. Louis; and

Whereas, we recognize the anniversary of the tragedy of the Srebrenica genocide every year in the month of July in order to honor those who lost their lives, those who survived, and their families and friends.

“SREBRENICA REMEMBRANCE DAY”
IN THE CITY OF ST. LOUIS

In witness whereof, I have hereunto set my hand and caused to be affixed the seal of the City of Saint Louis, this 11th day of July, A.D. 2009.

* Document courtesy of: The Association of Survivors of the Srebrenica Genocide in Saint Louis, Missouri. Official web site www.Srebrenica95.com.