Windsor, ON – Today Brian Masse M.P., NDP Industry, Automotive, and Border Critic along with Imam Dr. Zijad Delic, Emir Ramic, President of the Congress of North American Bosniaks-Canada, the Canadian Bosniak community and many supporters launched the campaign for a Srebrenica Remembrance Day in Canada with the public presentation of a motion to be introduced in the House of Commons this upcoming fall session.

“The time is long past due for Canada to declare July 11 Srebrenica Remembrance Day. This anniversary raises awareness of the tragic suffering of the people of Bosnia and honours and remembers those who were killed as a result of the policies of genocide, ethnic cleansing, and war crimes carried out in Bosnia and Herzegovina from 1992 to 1995,” Masse stated. “With this declaration, Canada acknowledges the importance of this event in helping to bring closure for the Bosnian people through truth and justice. The institutionalization of Srebrenica Remembrance Day every July 11 will help to inform future generations and assist all of us to work towards peaceful coexistence.”

After the fall of Srebrenica on July 11th 1995, Bosnian Serb forces, commanded by General Ratko Mladic (an indicted war criminal), and paramilitary units rapidly executed more than 8,000 Bosniak (Muslim) men, boys, and elderly, who had sought safety in the area. Moreover, approximately 30,000 people were forcibly deported in an UN-assisted ethnic cleansing. The European Parliament resolution referred to the Srebrenica Massacre as “the biggest war crime in Europe since the end of WWII.” 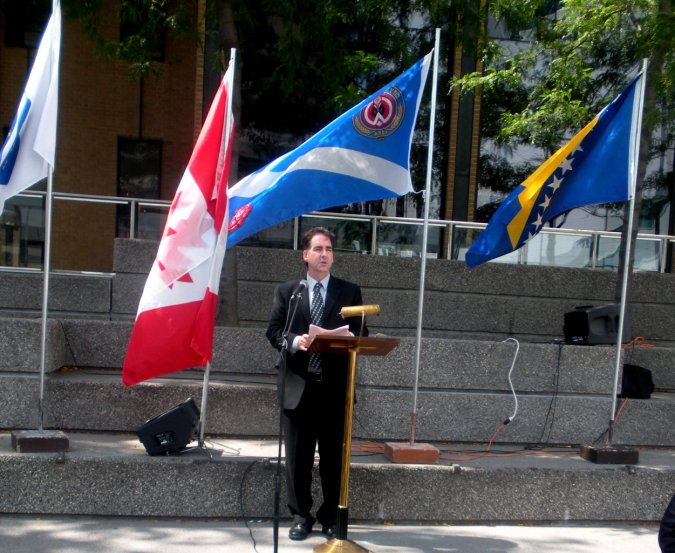 This atrocity has been declared an act of genocide by the International Criminal Tribunal for the Former Yugoslavia. Both the United States House of Representatives and the United States Senate in 2005 have passed resolutions on the Srebrenica Genocide and all the atrocities that occurred during the war in Bosnia-Herzegovina between 1992 and 1995. The European parliament passed its resolution on January 15, 2009 institutionalizing July 11 as the day of Remembrance for the Srebrenica Genocide.

Senad Alicehajic, President of the Bosnian Club of Windsor, stated “We are also here today to recognize the fact that individuals committed these terrible acts, but it is the ideology of ethnic cleansing, fascism, racial and cultural discriminations, Nazism, and hatred that allowed them to carryout these atrocities. While the perpetrators of these crimes need to be brought to justice it is equally important that these false ideologies be condemned. The Srebrenica Remembrance Day will provide just such an opportunity.”

“The US Congress, both the House and Senate have passed resolutions. The European Parliament has done the same earlier this year. The House of Commons needs to act. With this motion the opportunity presents itself for Canada to join other countries in doing something that should have been done long ago,” Masse stated.

Historical overview of events leading to this moment:

Good Afternoon, My name is Senad Alicehajic, member of the Bosnian Community Windsor, President of the Bosnian Club Windsor and social worker at a local mental health agency.

Let us remind ourselves:

It is Canada who came to Bosnia before Bosnia came to Canada. It is Canadian battalion that served in Bosnia for over 3 years and it is Canada who lost 9 soldiers serving these two great countries. Our past is jointed in many ways as we continue to strive for the justice, peace, respect and honor.

These values are universal and transcend the boundaries created by humans. 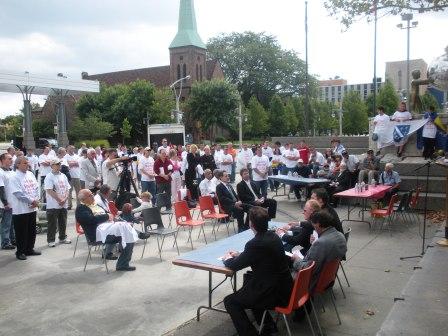 Today we are here to reiterate our commitment to the promise of Never Again Genocide, Never Again Concentration Camps and Never Again Mass Graves. We are here today to show that maintenance of this commitment is very important because these strong messages can actually save lives of those living in regions impacted by raging wars.

Today we firmly stand here to confirm that we as human beings share the universal truth about the good and the wrong. We all know that when we do a good deed we feel great about it for a while and then the feeling goes away, but when we do a bad deed, the wrong feeling stays with us for much longer period of time, sometimes our whole life. This tells us that doing good deeds is natural and doing wrong deeds works against our body and soul; because, in essence, we are all created as good people and our body always tells the truth.

The truth that we want to say today, loud and clear, has been confirmed by many living and unfortunately many dead people. Experts from many renowned organizations, International courts and tribunals, survivors, witnesses, and exhumed remains from the mass graves all tell the same truth.

THAT IN THE PERIOD BETWEEN THE 10TH AND 14TH OF JULY 1995 IN THE REGION OF A SMALL TOWN IN EASTERN BOSNIA CALLED SREBRENICA, AT LEAST 8353 MEN AND BOYS WERE GRUSOMLY EXECUTED BY SERB FORCES, UNDER THE COMMAND OF GENERAL RATKO MLADIC, WAR CRIMINAL, STILL AT LARGE.

LET US REMIND OURSELVES THAT SREBRENICA AT THAT TIME WAS A SAFE HAVEN PROCLAIMED BY THE UNITED NATIONS.

Bodies of these innocent people were then buried in multiple mass graves, which were subsequently, by using heavy machinery, moved again and buried in secondary mass graves in order to bury the truth too.

Some bodies were dismantled in this process and the body parts of one person in some cases ended up in two, three or more different mass graves.

We are not here today, 14 year later, to prove anything to anyone or to point fingers at anyone. It is well know to the world what happened in Bosnia between ’92 and ’95. It has been confirmed by the International Tribunal in Hague, By the Senate of the USA, by the European Union Parliament, and by other counties, states and cities including the state of Michigan, city of Grand Rapids and the countries such as Croatia and Monte Negro.

The question is: What is Canada waiting for?

They all passed a resolution or a proclamation confirming the fact that an act of Genocide, the worst one Europe has seen after the WWII, has happened in the town of Srebrenica.

Again, the reasons for these resolutions are not one sided. They are based on the universal belief of the democratic world that we need to recognize countries in trouble and to help in a timely manner, to prevent genocide and intervene before it is too late. It is for the victims of Genocide that we are doing this as they have no voice to do it for themselves.

We are also here today to recognize the fact that yes, it must have been individuals who committed these terrible acts, but it is the ideology of ethnic cleansing, ideology of fascism, racial and cultural discriminations, Nazism, and hatred that need to be trialed in the courts, and condemned in our hearts. We have to condemn such ideologies and fight for the justice, truth, equality and democracy. 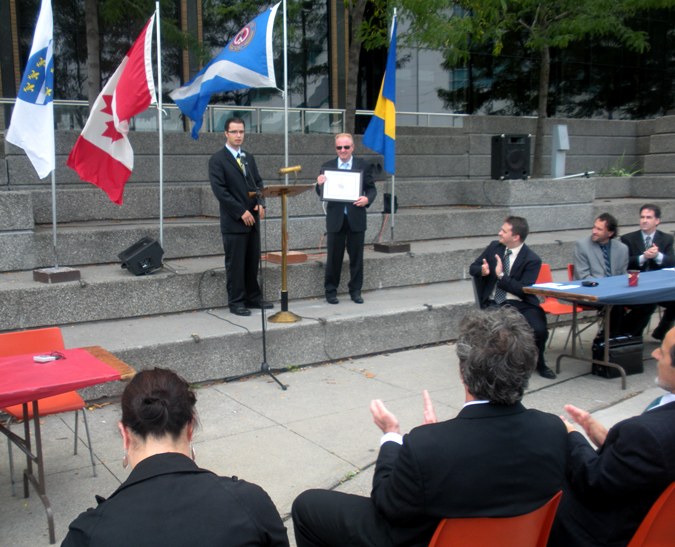 And this is where this story starts: During and after the war in Bosnia, as many as 50 000 Bosnians came to Canada as immigrants and refugees and found their new home here. As the new diaspora we worked hard to become a piece of the Canadian Multicultural Mosaic and to be productive members of this democratic society. We also learned how the system works and how we need to organize to preserve our culture and heritage.

However, this most important piece is not completed yet.

Our open wound still hurts as we watch every year, on July 11th, the day of genocide anniversary, hundreds of coffins placed in the ground for the last time.

So far, experts have been able to exhume and identify, by using the DNA technology, over 3500 bodies, and their families were able to give them a proper burial in the Commemorative centre POTOCARI near Srebrenica.

Over 5000 others are still waiting to be found in mass graves and to be identified and buried.

Each Year, Over 40 000 people come in person to this place to say their final good byes to their brothers, fathers, sons, grandsons, uncles, grandfathers, while millions are closely watching on their TV’s and computers. Among those who visited POTOCARI are President Bill Clinton, current vice president Joe Biden, Carla del Ponte, prosecutor for the International Criminal Tribunal for the former Yugoslavia (ICTY) and the International Criminal Tribunal for Rwanda (ICTR) in August 1999 and others.

Today, only 14 years later, you are standing here and asking yourselves what went wrong. That is a complex question and we will not be able to answer it today, but what is maybe even more important question is what we can do to make it better for future generations.

This organization has been looking for support of Canadian MP-s, for the past 4 years, to help us on the road of recovery, to bring some closure to our past and to help us in our effort to have our voice heard in Ottawa.

It is only recently that we finally got the opportunity to do something like this. Thanks to Brian Masse, we are here today, all humbled and privileged to be able to help raise awareness on these sad, but true subjects.

Brian Masse agreed to work with Canadian Bosniaks towards, not only passing of a motion or a resolution or a bill, but also towards creating a prosperous Bosnia and Herzegovina in its effort to integrate in European Union.

By Sonja Puzic, The Windsor StarAugust 31, 2009 — Windsor West MP Brian Masse has launched a campaign for a nationally recognized Srebrenica Remembrance Day to mark the horrific 1995 massacre in Bosnia.

At a news conference in Windsor Saturday, Masse said he will present a motion in Parliament this fall to designate July 11 Srebrenica Remembrance Day. Masse was accompanied by members of Windsor’s Bosnian community.

The massacre has been referred to as the biggest war crime in Europe since the Second World War and declared a genocide by the International Criminal Tribunal for the former Yugoslavia. It is regarded as the worst atrocity of the war in Bosnia between 1992 and 1995.

The European Parliament passed a resolution early this year to mark July 11 Srebrenica Remembrance Day. The United States House of Representatives and the Senate have also passed similar resolutions.