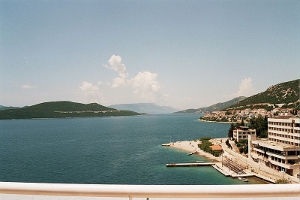 An article in Foreign Affairs Magazine says that after 14 years of intense international efforts to stabilize and rebuild Bosnia, the country now stands on the brink of collapse. Host Liane Hansen speaks with article authors Patrice McMahon, associate professor of political science at the University of Nebraska at Lincoln, and Jon Western, Five College associate professor of international relations at Mount Holyoke College.

Bosnia, once a symbol of conflict resolution through international cooperation, is falling apart. That’s according to an article in the current issue of Foreign Affairs. Its authors say that while the landmark 1995 Dayton Peace Agreement successfully stopped the violence in the former Yugoslavia, it also left behind an unstable political structure rife with ethnic divisions.

We’re joined now by the authors of the Foreign Affairs article. Patrice McMahon is an associate professor of political science at the University of Nebraska at Lincoln. And she joins us from the studios of NET Public Radio Network in Lincoln. Welcome to the program, Patrice.

HANSEN: Jon Western is a Five College associate professor of international relations at Mount Holyoke College. And he joins us from member station WFCR in Amherst, Massachusetts. Welcome to the program, Jon.

HANSEN: The article begins with these words: After 14 years of intense international efforts to stabilize and rebuilt Bosnia, the country now stands on the brink of collapse. Why?

Prof. WESTERN: Well, I think to set some background: the Dayton Accords created a decentralized political structure. And it was a weak central government supported by two entities: The Republic of Srpska and the Federation. Republic of Srpska is populated predominantly by Serbs and the Federation is populated predominantly by Bosnia Muslims and Croats.

And what we’ve seen in the last three or four years, though, were a number of developments that have been troubling. The first is an economic downturn. Unemployment today is between 27 and some estimates have it up to 40 percent. Roughly one in four Bosnians live in poverty. Foreign direct investment has essentially evaporated.

The second critical problem I think that we’ve seen is that the international resources commitment and attention to Bosnia has declined in the last several years. And then the final issue is just the reemergence of heated nationalist rhetoric.

HANSEN: The Brcko District in the northeast and the city of Mostar were both devastated during the war. In the wake of the Dayton Accords, Muslims, Croats and Serbs lived in – and I’m quoting your article here – “relative harmony in the Brcko District, but they remain extremely polarized in Mostar.” Why has one succeeded and the other failed?

Prof. MCMAHON: That’s a very good question, and after I visited Brcko and Mostar, I asked people in Bosnia and in the U.S. why there was such a difference. Certainly domestic leaders in Brcko have wanted to work together and have promoted ethnic cooperation.

But what our research really points to is the importance of centralized international leadership and also coordinated leadership. When I visited Brcko, I was astounded that all of the important international players were all located in the same building.

And certainly the obvious international security presence in Brcko was very important. And then finally, there was a lot of international economic investment in Brcko. And in Mostar, this was lacking – and in all of these ways – very decentralized international leadership. And as a result, Mostar still is very divided.

HANSEN: Attention has shifted away from the Balkans, particularly after 9/11. And in the article, you call for renewed U.S. commitment in the region. But after so many years in Iraq and Afghanistan, do you really believe the American people will support a new commitment of resources, military or otherwise, to what’s considered an internal conflict?

Prof. WESTERN: What we’re talking about is essentially a renewed diplomatic initiative that’s relatively low cost, but nonetheless, generates American leadership. We’re advocating for the appointment of a special envoy to the region as a whole.

Bosnia is a prospective member of the EU. That gives the international community a lot of leverage. There’s a lot of Bosnians who would like to see EU membership at some point in the future. It would certainly stabilize their economic situation. So what we’re advocating is for the U.S. to take a diplomatic leadership here.

Prof. MCMAHON: I hope that Americans would think that Bosnia is important. First, it’s certainly cheaper to prevent violent conflict than it is to stop conflict or to clean up the mess. And I think as Americans, Bosnia provides an incredible example of what the United States can accomplish in the world.

It’s really an excellent model of leadership, of multilateralism and a multi-institutional approach to state building. So I hope that Americans remember that as we reengage Bosnia and reengage our involvement in Europe.