DNA Results of the International Commission on Missing Persons Reveal the Identity of 6,186 Srebrenica Victims 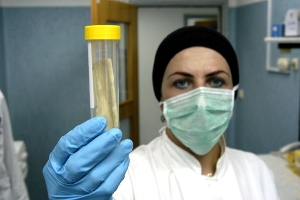 Through the use of DNA identity testing, the International Commission on Missing Persons (ICMP) has revealed the identity of 6,186 persons missing from the July 1995 fall of Srebrenica, by analyzing DNA profiles extracted from bone samples of exhumed mortal remains and matching them to the DNA profiles obtained from blood samples donated by relatives of the missing.The overall high matching rate between DNA extracted from these bone and blood samples leads ICMP to support an estimate of close to 8,100 individuals missing from the fall of Srebrenica.

The ICMP has made to date a total of 12,520 accurate, DNA-led identifications of individuals from all of Bosnia-Herzegovina since ICMP’s DNA system went online in 2001. In the case of BiH, ICMP has DNA profiles from more than 69,051 blood samples collected from relatives and 25,033 bone samples from human remains on its database. The number of subsequent identifications made is much lower than this figure as more than one family member’s blood sample is needed for a positive match, and often several bone samples from a victim’s remains are needed for a positive DNA match.

Yet despite ICMP’s world-class forensic system, and despite having built the forensic facilities at Lukavac and at the Podrinje Identification Project in Tuzla specifically for the identification of victims of Srebrenica, their identification remains an extremely difficult, complex and time-consuming process. To expedite this process, more information is needed on the locations of burial and mass grave sites.

“The fact that ICMP has made nearly 6,200 identifications of Srebrenica victims is a remarkable success, and something that many people had said from the beginning would be impossible to accomplish,” said ICMP’s Director-General Ms. Kathryne Bomberger.

“However, it is a success of science that has sprung out of immense human tragedy: more than 520 bodies are being buried at Potocari this week, in addition to the 3,127 already buried here. Many families of Srebrenica victims are still waiting for information on their missing relatives. Many families who have identified their relatives are waiting for more remains to be exhumed from secondary mass grave sites before they bury their loved ones. So what we desperately need is for individuals with more information about the location of grave and burial sites to come forward.”

In many cases the perpetrators of Srebrenica removed mortal remains from one ‘primary’ mass grave and hid them in multiple sites in an attempt to conceal evidence of war crimes, thus leaving a trail of disarticulated skeletal remains, whereby body-parts of the same person can be found in different sites. In one case, ICMP identified a man missing from the fall of Srebrenica whose remains were found in four different mass graves two of which were 20 km from the other two locations.

The introduction of DNA by the ICMP as the basis for identifying large numbers of missing persons from the 1990’s conflicts in the Western Balkans enabled accurate identifications of persons that would never otherwise have been identified. The first DNA match, for a 15 year-old boy from Srebrenica, was made on November 16, 2001.