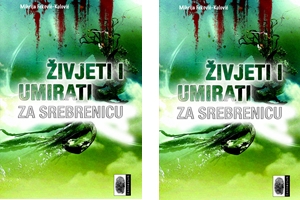 By Nidzara Ahmetasevic – Survivors of the worst massacre in Europe since the Second World War share their memories of events that must never be allowed to occur again.

The genocide committed in Srebrenica in July 1995 was one of the most tragic episodes in recent European history. Nobody could have imagined that something like that would happen following the end of the Second World War. Some people who were lucky enough to survive, however, shared their stories with the author who has written them down.

Mihrija Fekovic-Kulovic writes about the events that took place in July 1995 in much the same way as Srebrenica residents speak about them, that is, expressing only sparing emotion, discontinuously, and jumping from one event to another.

The author follows the lives of several individuals who escaped from the little town in eastern Bosnia just as the Serbian forces were entering.

The heroes – and these people were literally heroes – left their villages, after saying farewell to friends, family members and memories. Some left alone. Some took a piece of bread and a bottle of water in their bags. Some left with nothing. All were scared and semi-conscious of what might happen to them next.

The women sought shelter in the vicinity of the UNPROFOR base in Potocari. They recall having been thirsty and hungry and having seen the Serbian commander, General Ratko Mladic. Some smuggled their young sons out of the town. Many others did not manage to do so, though they tried hard.

The female side of the Srebrenica story, revealed by this book, is gripping. Before leaving their homes, the women baked breads of “crushed corn cobs, hazel flowers, apple peel and a handful of oats”. The bread made in this way was “as red as blood”. They shared it with their families as if it were treasure.

As men were leaving towards the woods, trying to break out of the enclave, the women, children and the elderly headed towards Potocari, wondering what to do with the girls. Mothers advised their daughters to “make themselves ugly”, put mud on their faces, place ugly scarves on their heads, and stoop while walking. Nevertheless, many were still taken away. The author believes about 500 women disappeared following the fall of Srebrenica.

There is also a story about the young boys accompanying the adults who tried to get to the woods. As they left their homes they were just boys, but during this journey they grew up fast, taking care of the wounded, the elderly and themselves.

Some old men headed for the woods as well. Grandfather Mujo was among them. Being old and slow, he lost the rest of the group and traveled alone for a time, witnessing incredible murders – the type witnessed only by the people of Srebrenica. Mujo saw it all, telling himself that he had to reach free territory to tell the world what he had seen. He succeeded.

In the epilogue, the author says she has left it to historians to determine the facts. All she has done is to convey the stories of people who witnessed the terrible events in eastern Bosnia in 1995.

No one of the people who shared these stories live in Srebrenica today. It is not likely that they or many others will ever return, either.

Every year, on July 11, they come to the town to attend joint funerals, when the lucky survivors bury their family members. But some of the heroes mentioned in this book lost as many as 35 members of their families and have not found any of their bodies to date. They live to find those remains, and to share their memories of events that must never happen again.

Publisher: Connectum Sarajevo with support from the Swiss embassy in Bosnia and Herzegovina.

Available only in Bosnian language