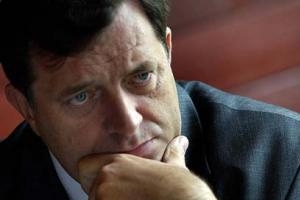 Ivan Anic – Counter-measures taken by OHR officials against RS premier Dodik’s intelligence network in Brcko have revealed new dimensions of a long-standing plan to undermine B-H, according to an analysis in the independent Sarajevo weekly Dani.

Following the counter-attack by OHR officials Valentin Inzko and Raffi Gregorian on RS premier Dodik’s para-state police and intelligence network, various details have emerged concerning its style, organisation and equipment, and about the names involved in this affair that has shaken both Bosnia and the international bodies responsible for its future.

The role of the Brčko battlefield in the overall war that Dodik has unleashed against the international community, and that targets in particular Inzko’s deputy and the supervisor for Brčko, Raffi Gregorian, which had remained somewhat in the shadows, had now been made crystal clear.

Reliable sources inform Dani that the District of Brčko is indeed no backwater, as confirmed by the supervisor’s decision to ban several protection agencies that form part of Dodik’s network, which up to now has enjoyed a monopoly. It is felt that the ‘deafening silence’ on Brčko represents a tactical retreat by Gregorian , given what is involved is a District rather dear to the American administration, it being a uniquely successful project within Dayton Bosnia. Gregorian was responsible for the appointment, four months ago following district elections, of Dodik’s SNSD tycoon Dragan Pajić as mayor of Brčko, supported by a controversial political coalition: SNDS (4 deputies), SDS (6), SDP (9) and minorities (2). This was a kind of down payment to Dodik in return for supporting constitutional amendments on the status of Brčko.

War and peace between Dodik and Gregorian

According to Dragan Čavić of the SDS, the deal was made well in advance of the elections, and in the expectation that the SNDS would do much better. Despite its indifferent results, Gregorian was stuck with the deal and even had to swallow SDS’s involvement in the government of the District, upon which Pajić had insisted. The supervisor also could not wholly ignore the SDP’s strikingly good performance, which among other things supplied a Croat, a Roma and an Albanian deputy. The end result was thus the above-mentioned all-party coalition, which is not working and is likely to be of brief duration.

As for the constitutional amendment, based on the Dayton compromise, its purpose was to permit the District to appear before the Bosnian constitutional court in the event that its interests are felt to be under threat. The initiative to proceed with its adoption demanded the support of District assembly deputies from all the three major national groups, which – given the RS government’s influence on all Serb political parties in Brčko, and its entrenched quest to add Brčko to the territory of RS – meant that their voting would be determined by entity cooperation.

Making the deal on Brčko at the height of their mutual war, both the supervisor and the RS premier considered their short- and long-term interests. Gregorian needed some success, if only for career reasons, especially in a District where he has practically unlimited powers but also responsibility, even though the amendment could not be implemented in reality. More long term, he placed his hopes in a renewal of the international community’s support for Bosnia that would weaken Dodik’s power and, more generally, lead to greater control over the RS leadership’s behaviour. This would of itself make the District’s position more secure, so that the risk of entrusting its governance to a man close to the destructive Dodik could be presented as a good tactical manoeuvre.

The best ‘protected’ town in the world

Dodik for his part calculated that acceptance of a hollow amendment could be publicly defended by acceleration of the hated OHR’s departure, while simultaneous installation of his mayor in Brčko would provide him with a good starting position at this strategic place for what, as is now becoming increasingly clear, is a long-planned project of the final destruction of Bosnia-Herzegovina. Given all this, Gregorian’s ban on the numerous protection agencies in Brčko is not a mere sideshow in some wire-tapping affair, but probably the most significant move in an operation designed to prevent the hitherto most serious threat to Bosnia’s constitutional order, sovereignty and territorial integrity. For the purpose of such a large number of security agents, equipped with such arms, vehicles and materiel, in such a small yet strategically vital territory, which divides the two parts of RS and keeps the Federation away from the state border, cannot simply be to tap into the communications of the supervisor and the local leaders in order to gain compromising material.

The details now coming out show that we are dealing with a well-organised and politically self-contained para-police structure focussed exclusively on the District. Among the banned security agencies is Alpha from Zvornik, whose true owners include the Zvornik municipal mayor Zoran Stefanović from the SNDS. The ban applies also to Wolf from Rogatica, whose director, Radomir Jovanović, is also a Dodik cadre. Elite Security too, the headquarters of which is significantly in Laktaši, is obliged to withdraw its considerable forces from Brčko. Most solidly established in the District is the agency called Centurion from Bijeljina, whose office is in the Sloboprom business park and whose owners are Dodik’s great sponsor Slobodan Ćurčić and the SNDS deputy in the Brčko assembly Slobodanka Ćurčić. This was the centre for listening in on OHR officials and local politicians. It is interesting too that Centurian this last spring received a credit of 451,591 KM from the Investment and Development Bank of RS.

As is to be expected, Gregorian was not happy with it becoming public knowledge that this intelligence service included also the long-standing OHR spokesperson in Brčko, Suzana Bursać. Her involvement is well-attested, but there are serious indications that she was not the only person from OHR to take part in this destructive mission. This inevitably brings into general disrepute the whole of Brčko OHR cadre policy, all the more so in that American supervisors there have always been generals without an army of their own; for whereas they came and went, the others remained behind.

Highs and lows of the Brčko OHR

In this context, the interaction between a great number of affairs and dismissals associated with the OHR becomes open to question, for there is a possibility that supervisors were subject to manipulation. There was the controversial dismissal of five District government officials (the case of Janković, Dedeić and others) for alleged membership of an urban mafia in the spring of 2007. Gregorian then made great play with his decree, presenting it as a significant victory against corruption. But investigators never came up with any proof: the investigation was halted, albeit remaining formally open. Given the open secret in Brčko that some OHR officials were rewarded for this with apartments and other material goods by interested power brokers, and the indications that it in fact involved not the removal of the town mafia, but rather of those who had actually been trying to unmask the real town mafia (actively defending the business interests of the priest Slavko Maksimović, accused of paedophilia), it is likely that the final outcome of this case will be a great disgrace for both the OHR and the Brčko legal system..

Gregorian’s latest decisive measures have re-established the authority of the Brčko supervisor. He proved ready to destroy the nefarious plans for destabilisation of this area, and because of its strategic importance of Bosnia-Herzegovina as a whole. It has also been shown that the other side did not have any compromising material to use against him. It is also encouraging that, by recently forcing the political parties to sign a coalition platform with precisely specified obligations for all officials and with criteria for their implementation, he sent a practical message that he will not tolerate any continuation of the obstruction of the District’s development, and especially not the import of putschist and adventurist scenarios from abroad.