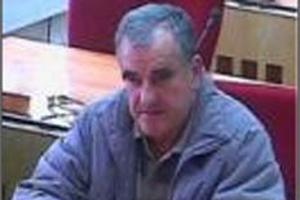 REUTERS – Bosnia’s war crimes court jailed a Bosnian Serb wartime army commander on Friday for 18 years for the killing, rape and torture of Muslims in eastern Bosnia early in the 1992-95 war.

“Momir Savic was found guilty of persecution, murder, imprisonment, rape, torture and other inhuman acts against Bosnian Muslim civilians in and around the eastern town of Visegrad from April to September 1992,” it said in a statement. Savic, 58, was a member of a paramilitary unit formed when the Uzice Corps of the former Yugoslav Peoples Army (JNA) launched its operations in Bosnia, and then became a company commander of the Bosnian Serb army’s Visegrad Brigade.

According to the indictment Savic and several other Serb soldiers had taken 10 Muslim civilians from their homes in a Visegrad neighbourhood in May 1992, beaten and then executed them.

He took part in other, similar incidents and once, “when one civilian tried to run away, shot at him … and deprived him of his life,” it said.

He was also found guilty of having repeatedly raped a Muslim woman in her house from June to September 1992, threatening her to stop her telling anyone, as well as of taking part in the interrogation and beating of Muslims from villages around Visegrad, and of plundering and burning their houses.

Bosnian Serb forces, helped by the Serb-dominated JNA and Serbian paramilitaries, committed the worst atrocities against Muslims in eastern Bosnia early in the conflict as part of their bid to create exclusively Serb territories.

The Bosnian war crimes court was set up in 2005 to allow the International Criminal Tribunal for the Former Yugoslavia (ICTY) in The Hague to focus on the most serious abuses of the conflict in which over 100,000 people were killed.