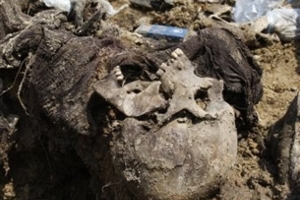 A new mass grave containing dozens of victims of the 1995 Srebrenica genocide has been discovered in eastern Bosnia, an official said Tuesday.

The Srebrenica Genocide was the July 1995 killing of at least 8,372 Bosniak (Bosnian Muslim) men and boys, as well as the ethnic cleansing of 25,000-30,000 refugees in the area of Srebrenica in Bosnia and Herzegovina, by units of the Bosnian Serb Army.

The remains of more than 6,000 of the genocide victims have been exhumed from about 70 mass graves around Srebrenica, with more than 5,600 people identified by DNA analysis.

The grave was discovered next to the house of a Muslim refugee who returned to Mrsici village, near the town of Vlasenica, said Lejla Cengic, spokeswoman for Bosnia’s Missing Persons Commission.

“So far we have found the remains of nine people, but we expect to find remains of at least 20 people,” she told AFP. Exhumation was expected to continue for several days.

Cengic said the site at Mrsici was a so-called primary grave which could ease the process of identification.

Victims from Srebrenica are in most cases found in secondary graves, where remains had been moved from initial burial sites in an attempt by Serbs to cover up the crimes.