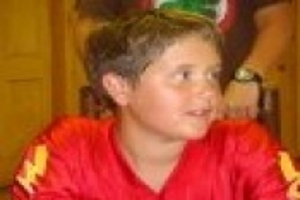 SAMUEL R. HARRIS AND MY MOM

By Emin Seferovic-Drnovsek – On April 29, 2009 at William Howard Taft High School, Samuel R. Harris came as a guest speaker. He spoke to the 7th grade Academic Center students during their 6th period class. Mr. Harris was invited to talk about the Holocaust.

The 7th grade language arts teacher Mrs. Asvos has been having us reading “Night” by Elie Wiesel which is about the Holocaust. Ms. Asvos worked hard and got Mr. Harris to come to our school.

Samuel R. Harris is the current president of the Illinois Holocaust Museum and Education Center. At the opening of his Illinois Holocaust Museum and Education Center, Bill Clinton (Former President) gave a speech along with Elie Wiesel and other speakers too. Samuel R. Harris lives with his wife Dede in the suburbs of Chicago. Samuel Harris started off telling us about his childhood. He told us that when he was born his Polish name was Szlamek Rzeznik. He lived in Deblin, Poland. Sammy had two sisters and one brother. His dad was a scribe. Harris had polio caritits which made him almost completely blind. His mom put eye drops in his eyes that helped them heal and he recovered.

When he was about four and a half years he witnessed a Polish airplane get destroyed by a Nazi airplane. Ever since then, the situation got worse in Poland. He told us how he remembered that one day the Nazis came into Deblin. They stormed and were yelling, they beat the Jewish men. As Harris said, “I don’t say the Germans I say the Nazis because not all Germans are bad.”

The Nazis made a ghetto; they closed the town down with a barbwire fence. The Nazis would come and take the Jews and put them in train carts in which they were sent to the concentration camps. Harris had hardly anything to eat; the whole town barely had anything to eat. They were being starved.

The day came when the Nazis came in and told the Jews to line up outside. His family hurried and got outside. There were many gunshots. Many men were whipped or beaten. There Harris stood with his family right next to his father. His father told Harris to run into a bundle of sticks that was near by and to hide there and not move. Harris quickly and quietly ran to the bundle of sticks and hid behind them. When he came there his sister was there too. There they watched the Jews get sent into the train carts. From that moment on he never saw his mother or father ever again. He had to run and hide for a couple of years. Harris faced death many times when he was little. This was all going on for him while he was only 4, 5, 6, 7 years of age. Samuel went through concentration camps, near death experiences, and seeing hundreds of dead bodies.

Harris is very thankful to be alive. He and his two sisters survived. One of his sisters lives in Austria and the other sister lives in Buffalo Grove, IL. After he gave his story about his life, he answered questions.

Ms. Asvos asked me to explain about what my mom Sanja Seferovic Drnovsek and aunt Selena do for the Bosnian Community to Mr. Harris. I told Mr. Harris , “My mom held a educational meeting at Sulzer Library in Chicago. The theme was about Genocide Prevention. She invited a professor Michael Sells from the University of Chicago who wrote a book about a genocide in Bosnia. She also got a representative for the Darfur Genocide who explained what was going on in Darfur and how the International community could help to stop genocide. There were the editors of Bosnian magazines and TV.

Two Bosnian women gave the testimonies about genocide in Srebrenica, my mom wrote stories about them because they were too emotional to talk about their sons, husbands and fathers who were killed . They were in the library. We read those stories and looked at their photos. The point of the gathering was to prevent genocide from happening again. She talked about the holocaust too. She’s been working really hard to spread the word about the Srebrenica Genocide.

Harris said, right after I finished, “Give great thanks to your mom, she is doing a great thing. The point of me coming here and giving speeches is to spread the word, the same purpose that your mom had on that event about genocide prevention. We have to stop bullies. Hitler was a bully. [Radovan] Karadzic was also a bully. We have to stop bullies so the Holocaust and genocides won’t happen again.”

Harris finished answering other students’ questions. When he finished he came right to me and shook my hand. I told him that my grandfather, Mensur Seferovic, fought in World War II and fought with the allies. He also was captured by the Italians and was in a concentration camp. My grandfather wrote 23 books about the war and life.

”I hope to follow my mother’s path and become a part of genocide prevention and spread the word. My aunt had, as well , an interview with Elie Wiesel.”

Mr. Harris was very pleased. He congratulated me and my family. He told me that Elie Wiesel is his friend and that he spoke with him when they had the opening of the Holocaust Museum in Skokie.

At the end, Mr. Harris was selling his book SAMMY: Child Survivor of the Holocaust, for $10. He gave me one for free and signed it on the inside cover of the book because I knew and he knew that my mom would love to read his book. I shook his hand again for the last time and thanked him for coming to our school.