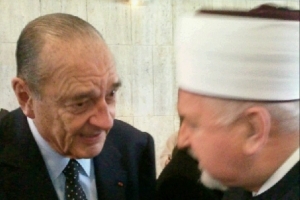 Invited by president of Fondation pour la Memoire de la Shoah, David de Rothschild, Reisu-l-ulema Dr. Mustafa Ceric took part today in Paris, the seat of the UNESCO, in the presentation of project “Aladdin”, accompanied by some two hundred prominent intellectuals, historians, academics and political personae from thirty countries, most of them from the Islamic world.

The gathering is about cultural and educational initiative for promotion of the Jewish-Muslim dialogue based upon mutual acquaintance, respect and refusal to deny and diminish Holocaust. Hosted by the UNESCO, former President of France Jacques Chirac, Prince El-Hassan bin Talaal of Jordan, former President of Indonesia Abdurrahman Wahid and former German Chancellor Gerhardt Schroeder, project “Aladdin” aims to assist in Muslim-Jewish dialogue so as to remove many a prejudice and stereotype which burden the Muslim-Jewish relations in the world.

“The call of conscience”
A statement, titled “The Call of Conscience”, was adopted to denote the principle of the project:

We, women and men in public life, historians, intellectuals and people of faith have gathered to announce that defence of values of justice and brotherhood must overcome all obstacles on the way to victory over intolerance, racism and confrontation.

We are witnesses to daily increase in hatred and violence which deepen the abyss of misunderstanding.

That has a particular impact upon the current relations between Muslims and Jews who have, for centuries in Persia, in the Middle Ages of Europe, in Northern Africa and in the Uthmaniyyah Empire, lived in relative harmony.

Facing the lack of knowledge, the prejudices and competing sentiments which we all reject, we believe in acquainting aourselves of one-another, and in the primacy of History.

Therefore we affirm, above all political views, our decisiveness to defend the historic truth as there is no peace based upon lies. The Holocaust is a historical fact: a genocide in which some six Million European Jews perished.

Its magnanimity is universal, as values of dignity and respect of human being is what the Nazi Germany and its European allies sought to destroy. Denial of that crime against humanity is not only an affront to the memories of the victims but an affront to the very idea of civilization. Therefore we believe that learning about this tragedy is a cause for all who have the heart and will to prevent future genocides.

We call upon all people of conscience in the world to work with us
The same demand for truth obligates us to remember the good people in Europe as well as among Arabs and Muslims.

We declare, together, our mutual wish to promote truthful, open and brotherly dialogue.

In that spirit we gathered in this project “Aladdin”. We call upon all people of conscience in the world to work with us in this joint venture of mutual acquaintance, respect and peace.

Unite in the struggle against anti-Semitism and Islamophobia
In this regard, Reisu-l-ulema, Dr. Mustafa Ceric, stated in Paris: I thank Mr. David de Rothschild to participate in this interesting project hosted by the UNESCO and supported by world statesmen, intellectuals, historians and theologians.

The importance of this is augmented because of the fact that I come from Bosnia and Herzegovina where, at the end of the 20-th century, a genocide was perpetrated upon Muslims in Europe, several decades after the Holocaust. This is, therefore, the right opportunity and place for me to remind all that Muslims and Jews have reasons to gather around a joint project such as this one and unite in the struggle against anti-Semitism and Islam-phobia, which phobia has gathered speed of recent.

July 11th – the day of remembrance of the Srebrenica Genocide
It suffices to state that Muslims and Jews have a joint experience of persecution and genocide in Europe: both were expelled from Spain (Endelus) in the fifteenth century, with the Sephardic Jews finding a safe haven in Sarajevo, which is best witnessed by the Sarajevo Holy Haggadah, and both suffered a genocide in the twentieth century, Jews from the Nazis and Bosnian Muslims from the Serbian aggressors.

It is for that reason that we respect the fact that the European Parliament adopted, on January 15, 2009, a resolution to proclaim July 11th as day of remembrance of the Srebrenica Genocide and called upon all “people of conscience” to remember, on July 11th, the crime against humanity which was committed on July 11th, 1995, in Srebrenica against Bosnian Muslims and, consequently, we call for all to take an oath that it will never happen again to anybody.

We have committed to develop the Muslim-Jewish cultural dialogue
I am happy to advise you about the initiative “With culture to unity”, which Dr. Vladimir Salamon, Director of Jewish cultural group “Bejahad”, and I, initiated and signed on September 9th, 2006 in Hvar, Croatia, and took on to develop the Muslim-Jewish dialogue as there are more positive, rather than negative, historical examples for us to learn from and help one another free ourselves from prejudices and stereotyping which take us further away from our unity in resisting anti-Semitism which is on the increase, and Islam-phobia which endangers the world peace and stability – were the parting words of Reisu-l-ulema Dr. Mustafa Ceric in Paris.